May 20, 2021
Sheridan’s Screen Industries Research and Training Centre (SIRT) has been selected as an Epic Games MegaGrant recipient for 2021, a first for the Centre.

The $100,000 (USD) Epic Games MegaGrant will be used to ensure the development of further innovations leveraging the Unreal Engine – the world’s most open and advanced real-time 3D creation tool. SIRT is at the forefront of this type of virtual production (VP) development, which has enabled its industry partners to innovate their VP workflows.

“We are very excited to be a recipient of an Epic MegaGrant. It will support SIRT’s efforts to maximize understanding and application of Unreal Engine with the next generation of students and content creators, as well as current industry professionals. SIRT and Toronto’s screen industries will be brought to the next level in terms of virtual production innovation,” says David Dexter, Director of SIRT. 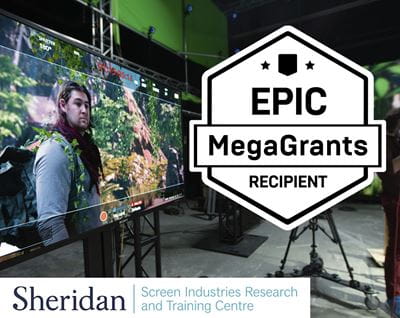 The MegaGrant will help establish and support collaborative projects, locally, national and internationally, that will advance the screen industry’s use of Unreal Engine through partnered applied research and toolset development for film, television, gaming and virtual reality. The assistance will also support SIRT in its VP contributions to enhance institutional curriculum and applied research. Given the scale of Sheridan’s programming in animation, gaming and related areas, and the global distribution of its alumni, the outcomes of this grant will have a far-reaching impact.

“Sheridan’s SIRT is a vital source of expertise, training and support for our partners in the screening and media industries,” says Dr. Vicki Mowat, Director, Research, at Sheridan. “This support will continue to secure SIRT’s position as a leader in virtual production innovation.”

“Virtual production has been transformative for content creators of all stripes, from film and television, to animation, immersive technologies and beyond. Unreal Engine virtual production workflows bring unparalleled flexibility to creative teams, but require a different production approach,” says Miles Perkins, Industry Manager, Epic Games. “We're excited to support SIRT with this Epic MegaGrant to help educate a wider swath of the filmmakers and animators of today and tomorrow in leveraging these powerful new creative workflows."

Expanding SIRT’s research and development capacity for virtual production employing Unreal will address an area of demonstrated regional and national need. The majority of Canadian businesses seeking to develop or incorporate virtual production are small- to medium-sized with limited resources to assemble the infrastructure and expertise needed. Additional capacity will ensure that SIRT can support more businesses adopt and innovate with virtual production, as well as provide industry-focused workshops and training.