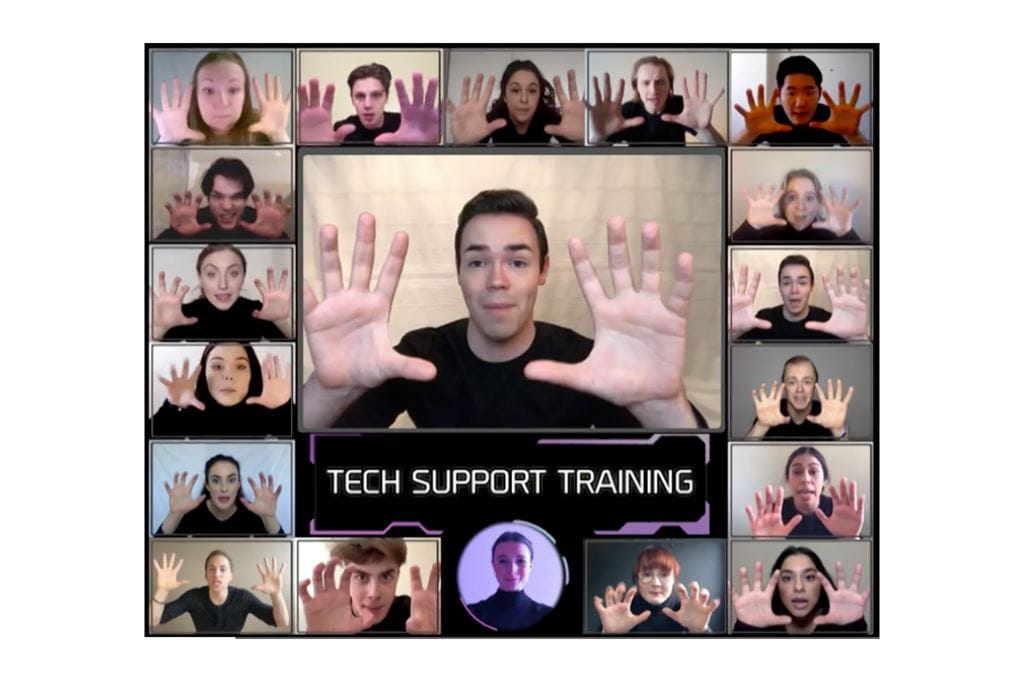 The global pandemic may have forced Canadian post-secondary campuses to close their doors last month, but it didn’t stop Sheridan faculty and students from completing the production of a new musical that had been scheduled to be performed as part of the Theatre Sheridan 2019-20 season this April.

Under the guidance of industry veteran and renowned director Ann Hodges, fourth-year students in the Honours Bachelor of Music Theatre Performance program continued rehearsing the musical In Real Life while in self-isolation in their homes across Canada, using the video conferencing software Zoom. A fully-choreographed and professionally-produced video of the musical’s opening number, “A Million”, was released Wednesday by Sheridan’s Canadian Music Theatre Project (CMTP) – the incubator that first helped to develop the musical in 2018.

As a poignant example of ‘life imitating art’, the storyline of In Real Life may never be more relevant than it is right now. Co-written by Toronto playwright Nick Green and composer Kevin Wong, the musical is set in a not-so-distant future in which isolated students communicate and interact entirely via technology. Story development began years ago with support from CMTP Producing Artistic Director Michael Rubinoff, who saw value in the uncommon blending of science fiction and music theatre.

“I’m grateful to Nick, Kevin, Ann and their creative team for going on this ride and finding a way to make this work in a way that is really impressive,” said Rubinoff. The team overcame the hurdles of having the director (Hodges) in Winnipeg, a music director (Chris Barillaro) in Montreal, a choreographer (Janie Pinard) in Sudbury, a set and light designer (Joe Pagnan) in Stoney Creek, a projection designer (Nick Bottomley) in Halifax and students everywhere in between.

“I also want to acknowledge our incredible students,” said Rubinoff. “The way they’ve conducted themselves with professionalism, commitment and dedication has inspired me, our faculty and our entire team. They’ve given us a gift and have forever left their imprint on this show.”

In addition to producing the opening number, students recently performed a walk-through of the entire musical on Zoom for a private audience of parents and close friends. Audio recordings of students are also expected to be released in the near future. The recording of “A Million” is being showcased on The Social Distancing Festival – a digital platform built by Green, with the assistance of several Sheridan students, to celebrate works of art around the world that were cancelled due to the global pandemic.

“Theatre is such a developmental process, and online rehearsal could be useful for the continuing shaping of theatre,” Wong said. “This has become a huge milestone in the development process of our piece, even though we didn’t get a public-facing production out of it.”

“It wasn’t in an actual theatre, but we can be proud to say we were involved in the first virtual production of In Real Life,” added Sheridan student Daniel Allain, who played the musical’s lead character Max. “I’m never going to complain about an injury I might have, or any other setbacks I might suffer, because you really can overcome it. You can overcome anything, even a pandemic. They always say the show must go on. And that’s exactly what we did.”

Read the backstory of In Real Life’s remote rehearsal and production process.

Pictured top right: A screenshot from the virtual performance of "A Million" from In Real Life.