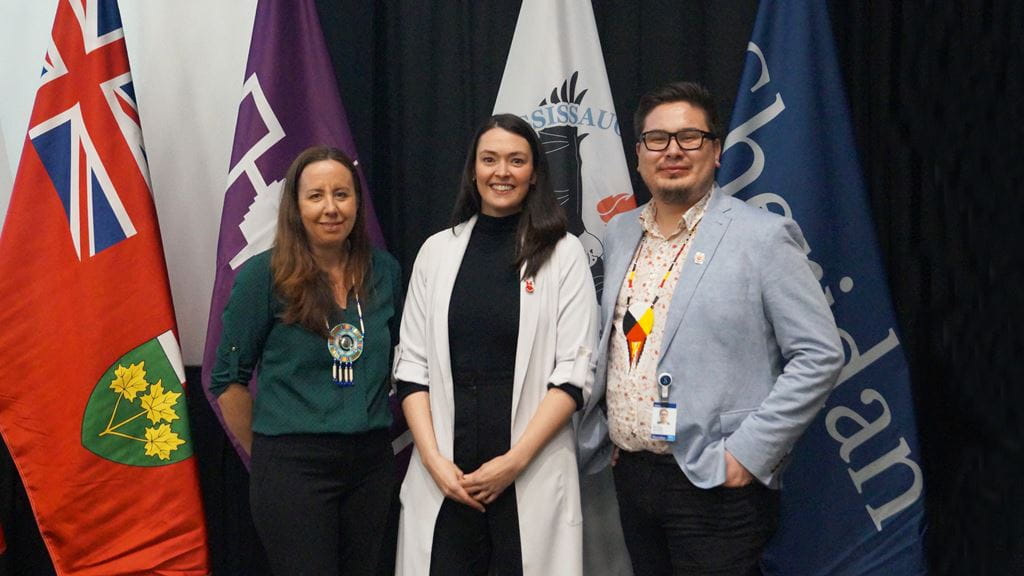 Commissioner Qajaq Robinson and Director of Research, Dr. Karine Duhamel, of the National Inquiry into Missing and Murdered Indigenous Women and Girls participated in a conversation around the Inquiry’s final report – Reclaiming Power and Place – at Sheridan’s Trafalgar Campus on March 5.

The evening opened with remarks from Sheridan Elder-in-Residence Bertha Skye. She delivered the land acknowledgment and commented on the ongoing violence Indigenous women and girls face, saying: “Women are life-givers, water healers and future leaders. We want our daughters and granddaughters to be safe.” Sheridan’s Director of Indigenous Engagement, Elijah Williams, facilitated the discussion with the distinguished panelists in front of an engaged audience of staff, students and community members.

Commissioner Robinson, born and raised in Nunavut, is a strong Northern advocate who has worked on a wide range of issues affecting Indigenous rights. Most recently, she worked as legal counsel at the Specific Claims Tribunal, traveling to First Nations communities across Canada. She emphasized the importance of grassroots movements in making the historic Inquiry come to fruition. “It is the mobilization of women, girls, gender-diverse people, survivors and their families that pushed this as an election issue,” she said. “It is their perseverance and their resistance that made the Inquiry happen.”

Dr. Duhamel is Anishinaabe-Métis, a historian, and currently a curator at the Canadian Museum for Human Rights. She drafted the inquiry’s final report, which she described as one “centered in stories.” Those stories came from more than 1,400 survivors and families across Canada who provided testimony. “We treated each one as a gift,” she said. As well, more than 800 shared their experiences through artistic expression like paintings and beadwork and more than 80 experts, knowledge-keepers and officials contributed to the Truth Gathering Process.

Both Commissioner Robinson and Dr. Duhamel shared some of the challenges that came with the nearly three-year-long Inquiry. “We had to balance legal process with an environment that’s trauma-informed and culturally sensitive,” says Commissioner Robinson. “We couldn’t compel people to come and testify.” Dr. Duhamel adds: “After decades of broken trust we had to earn the trust of people in each community we visited. We weren’t owed anything.”

Findings from the report concluded that factors like state violence, inter-generational trauma, economic and social marginalization, nefarious policies and the failure to acknowledge the expertise of girls and women in Indigenous communities have contributed to what it calls a “race-based genocide.” It provides 231 Calls for Justice, which the Inquiry team is waiting to see addressed in a National Action Plan from the Government of Canada.

Reclaiming Power and Place, said Commissioner Robinson, is a “tool that validates the experience of survivors and their families” after decades of erasure and dismissal of those truths. “It offers a heightened legitimacy to those experiences.” Reflecting on the Inquiry and the subsequent time spent compiling the report, Dr. Duhamel said: “When you work on a project with such heart and it stops, it’s heartbreaking. Events like these are important to keep the work alive.”

Williams echoes that sentiment. “We want to keep these dialogues open as part of our commitment as an institution to Truth and Reconciliation, and our commitment to the Indigenous Education Protocol for Colleges and Institutes,” he said. “It’s a priority to keep our learning community educated so that people are aware and reports like this don’t just sit on the shelf and collect dust.”

Pictured above (from left to right): Dr. Karine Duhamel, Director of Research from the National Inquiry into Missing and Murdered Indigenous Women and Girls, Commissioner Qajac Robinson, Elijah Williams, Director of Indigenous Engagement at Sheridan.