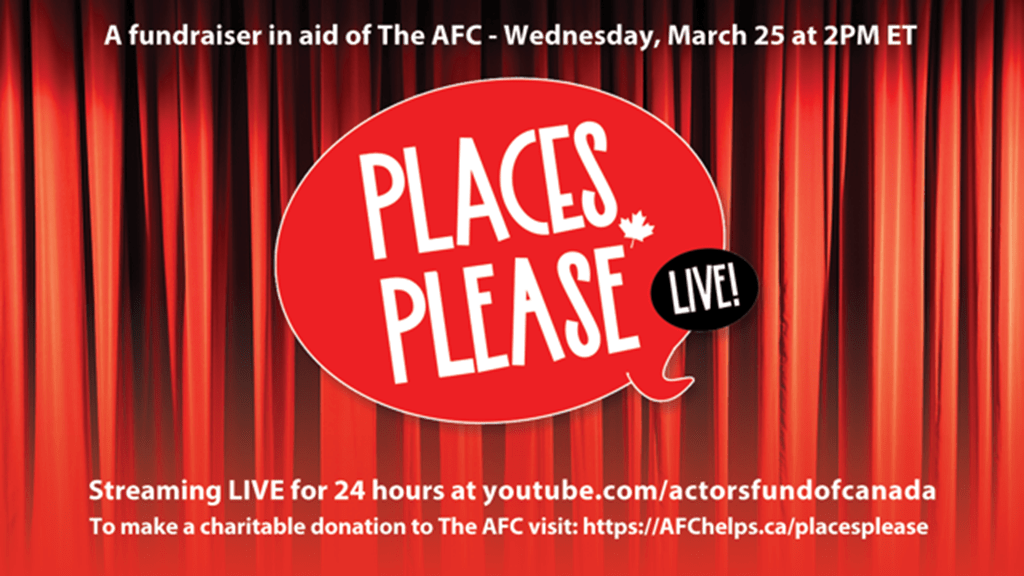 Places, Please: A virtual 24-Hour telethon to benefit the Actors Fund of Canada

The Actors Fund of Canada (AFC) and Olivier Award-winning producer Michael Rubinoff are excited to announce Places, Please a 24-hour virtual telethon to benefit members of the entertainment industry impacted by COVID-19. The online fundraiser will begin on Wednesday, March 25 at 2 p.m. EST and will continue live for 24 hours, until Thursday afternoon, with all donations going to The AFC.

“Our mission is to digitally bring together our theatrical community and audiences,” said Rubinoff. “Together, we will promote hope and resilience, carried out through living room showcases,  to highlight the extraordinary theatres and talent across the country.”

“The AFC is the lifeline for Canada’s entertainment industry,” said David Hope, Executive Director of the AFC. “Our organisation and members of our industry have experienced immense strain in the last week and this fundraiser will go a long way to help in these difficult times.”

The AFC is experiencing an unprecedented increase in demand due to COVID-19. Through compassionate and confidential support, the AFC helps Canadian entertainment professionals when they are at their most vulnerable to maintain health, dignity and ability to work. In this time of hardship, the organisation expects to expend 70% of its average yearly emergency financial aid budget on meeting requests for help that have come in just during the last week.

Make a charitable donation to the AFC.

Please direct all media inquiries to:

ASHLEY BOTTING is an alumna of The Second City where she wrote and performed in four Mainstage shows, and will direct their revue for spring 2020.  Ashley With a “Y” - her improvised one-woman musical cabaret, was NOW Magazine’s #1 Toronto Comedy Show, and The Stars of Mars - a musical she co-wrote - was awarded the Stage West Pechet Family Musical Award by The Playwrights Guild of Canada. She’s a panelist and writer on CBC Radio's Because News, and has written for the Emmy-winning series Odd Squad.  Selected acting credits are TV: What We Do In The Shadows, Schitt’s Creek, Odd Squad.  Theatre: Beautiful Man (Factory) The Second City Guide To The Symphony (The Kennedy Center, Roy Thomson Hall) Cam Baby (Theatre Mischief).

MICHAEL RUBINOFF is a Tony Award nominated and Olivier Award winning producer who conceived the musical Come From Away. In 2011 he launched the Canadian Music Theatre Project (the “CMTP”), an international incubator for the development of new musicals at Sheridan College where he originally produced and developed Come From Away. He previously served as Sheridan’s Associate Dean of Visual and Performing Arts and is currently Producing Artistic Director of the CMTP, Producer for Theatre Sheridan and a member of Sheridan’s Board of Governors. For his role in creating Come From Away, he was awarded the Meritorious Service Cross by Canada’s Governor General. He is a proud graduate of Western University’s law school.