Sheridan students took home six medals in five categories at the closing ceremony of the Skills Ontario Competition, hosted at the Toronto Congress Centre from May 6 to 8. The result matches Sheridan’s record for total number of medals won at the provincial skills showcase and is the first year students from programs outside the Faculty of Applied Science and Technology stood on the podium.

The annual event draws 20,000 people over three days including 2,000 postsecondary competitors in 68 categories. It’s designed to spotlight the skilled trades and technologies as viable, first-choice career options to Ontario youth. This year Sheridan had 20 student competitors qualify for competition. 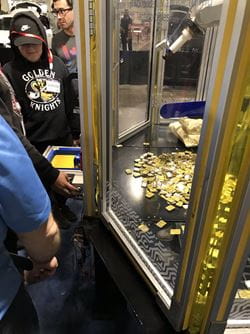 Representing the Pilon School of Business for the first time at the competition, Ashley Marshall from Office Administration - Executive won a bronze medal in IT Office Software Application category. Also a Sheridan first, Marc Santos from the Honours Bachelor of Photography program from the Faculty of Animation, Arts and Design won a bronze medal.

Elsewhere at the competition, Sheridan displayed various projects at its exhibitor booth including a hovercraft, a Rubik’s Cube-solving robot and a race track operated by a hand crank. Attendees could participate in a virtual reality architecture experience and get chocolate squares dispensed by a robotic arm. The Skills Ontario judging committee awarded Sheridan with second place in its Large Booth category.

Dean of the Faculty of Applied Science and Technology, Vertha Coligan, saw first-hand the dedication of Sheridan students and their coaches throughout the competition. “I’m so proud of Sheridan’s efforts at this year’s competition,” she says. “Not only did we send the biggest contingent of competitors ever to this year’s event, but our students’ medal haul and the recognition of our Sheridan booth proves our excellence in innovation and skills development.”

Coaches play a significant role in preparing the students for the competition. It’s one thing to attain the skills to be successful in their respective fields of study, and another to compete in that field under pressure in front of hundreds of onlookers. Mentors like Craig Brazil, Professor of IMM, knows well what it takes to excel in this environment. He’s the IMM Skill Competition Manager for Worldskills and year-after-year, his student competitors perform well because of their diligent preparation.