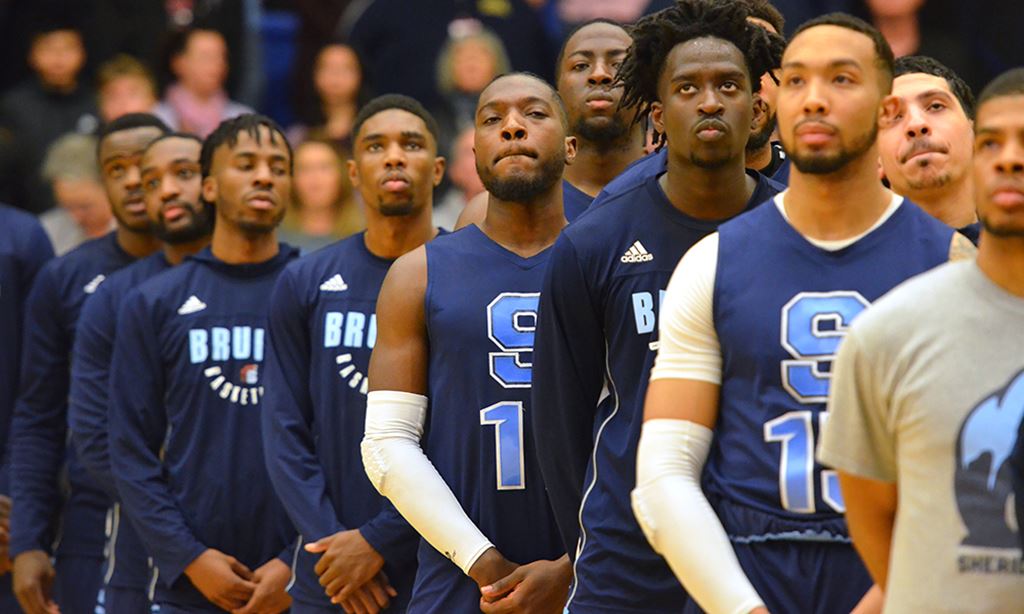 After trailing by as many as 15 in the first half, the Sheridan Bruins men's basketball team (32-10, 21-6 CCAA) climbed all the way back to hold a six-point advantage entering the fourth quarter, but were unable to hang on and suffered an 85-82 loss to VIU in the national championship game.

"We just didn't make big plays in the last three minutes," head coach Jim Flack said. "We were so good in clawing back from down 15. That is just character - pure and inspiring. Nick (Campbell), Tre (Anderson), and AJ (Thompson) were workhorses. Stef (Simpson) was a true leader, Khaleek (Bakari-Whyte) was counter punching all the way, and Romar Subban? What can you say - what a spark plug he has become."

After holding VIU to 12 third-quarter points on 5-of-16 shooting to build their lead, the Bruins were unable to keep the Mariners down in the final frame, as the PacWest champions were not only 7-of-15 from the floor and 3-of-6 from 3-point range, but they were also 11-of-13 from the free throw - more makes and attempts than the Double Blue had in the game.

Despite all that, Sheridan nearly forced an overtime session when Bakari-Whyte's desperation heave from beyond midcourt hit the rim and bounced out.

Jemol Edwards (14) and AJ Thompson (10) were also in double figures for Sheridan.

Although disappointed in the silver-medal result, Flack couldn't have been prouder of the way his team represented themselves, their school, and their local communities.

"When you step back and look at the make up of this group - mostly Peel, largely Brampton, with a sprinkling of Toronto - it's a wonderful tale of local kids achieving something special," he said. "No mercenary players were brought in to win a title. These are just kids who are products of ROPSSAA, BMBA, and the Mississauga Monarchs and they hung an OCAA banner and made a run to the Canadian final. The story will be lost in a market like Toronto - but it's not lost on us."

When the Bruins made the national final in 2017, it snapped a 10-year drought since they had last played in the season's final game. Now - after having played in two of the last three and with a core group still in place - Flack expressed great optimism about what the future holds for the members of the 2018-19 men's basketball team.

"One of my favourite Churchill quotes is this: 'Success is not final. Failure is not fatal. It is the courage to continue that counts.' These young men will be the embodiment of that," he said.