Dr. Janet Morrison was formally installed as Sheridan’s eighth President and Vice Chancellor at a dynamic and inclusive event held at the Living Arts Centre in Mississauga on Tuesday, October 16.

The event kicked off with a performance by the Grammy-nominated Bear Creek Singers, an Ojibwe drum group from Sault Ste. Marie.  In attendance were friends and family, a diverse group of international students from over 15 countries  wearing stoles bearing the colours of their national flags, employees and community members, and representatives from sister institutions, including Dr. Chris Evans, Executive Lead, Advanced Academic Planning, Ryerson University; Dr. Ulli Krull, Vice President and Principal, University of Toronto – Mississauga; and the President and CEO’s of Georgian College and Loyalist College, Dr. MaryLynn West-Moynes and Dr. Ann Marie Vaughan, respectively.

In her Installation Address, Dr. Morrison emphasized the vital role that postsecondary education plays in shaping individuals and transforming lives, and pointed to her own experience as evidence.  “I invested eleven years as a learner in postsecondary institutions in Canada and the United States and earned four degrees.  The outcomes I value most, however, are incalculable:  University gave me a voice; it taught me to think; and it compelled me to engage.  It sounds simplistic, but the process of earning my academic credentials inspired who I am, not what I do.”

Steve Boone, Chair of the Board of Governors and part of the Presidential Selection Committee, cited some of the qualities that led to Dr. Morrison’s appointment.  “Her deep understanding of the sector and her undeniable passion for student success caught our attention, given the importance Sheridan places on fostering positive personal, social and economic outcomes,” he said.  “Already, Janet is making a tangible difference, by better aligning our institutional initiatives to our key differentiators and priority areas of focus, and in her efforts to create a strategic planning culture that will lead to long-term operational sustainability at Sheridan.” 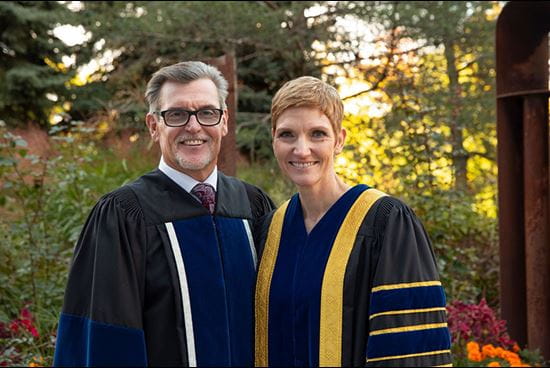 Pictured above: Steve Boone, Chair, Sheridan Board of Governors, and Dr. Janet Morrison.

Prior to being appointed President and Vice Chancellor, Dr. Morrison served two years as Sheridan’s Provost and Vice President Academic, which gave her insight into Sheridan’s character and fuelled her enthusiasm for her new role.  “My colleagues and I are driven by a compelling, ambitious vision and are proud of our unique identity.  We are committed to collegial governance, academic freedom, and the ownership of intellectual property by creators. We embrace the full continuum of scholarship, research and creative activities, including the applied work we undertake with external partners to create new products and processes.  Independently and collectively, these commitments drive academic quality, economic development, social innovation and entrepreneurism.  At Sheridan, we imagine and incubate great, big audacious ideas.”

Hazel McCallion, Sheridan’s Chancellor, presided over the oath of office.  The installation featured the debut of Sheridan’s ceremonial Mace, which is placed on stage to signal the beginning of the ceremony.  The Mace used was a prototype designed by two students in the Honours Bachelor of Crafts and Design program.  The students, Erik Irwin and Alan Ngo, will work with faculty mentors over the coming months to fully realize their creative vision for the Mace, which will be presented in its final form at Convocation in June, 2019.

The audience was also treated to an inspirational and compelling performance by a choir of second-year students in the Honours Bachelor of Music Theatre program.

The Installation ceremony preceded the first of four Sheridan Convocation ceremonies taking place at the Living Arts Centre this week, which will see over 1,000 students receive their degree, diploma or certificate.