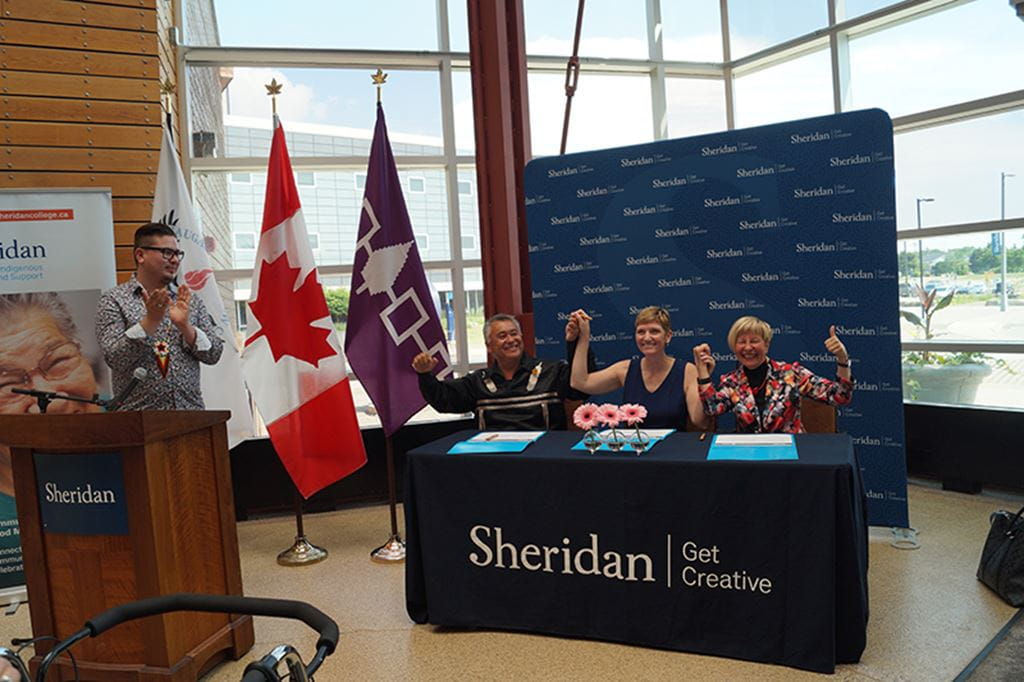 Sheridan marked a transformative moment in its history on Monday with the signing of the Indigenous Education Protocol. The Protocol was launched by Colleges and Institutes Canada (CiCan) in December 2014 to support its members’ commitment to Indigenous education and provide a vision of how they can strive to improve and better serve Indigenous peoples. Sheridan is the 57th institution nation-wide to add its name to the Protocol.

“This is a very proud day for Sheridan, and one that we have been working towards since we established the Centre for Indigenous Learning and Support (formerly the Aboriginal Initiatives Office) in 2014,” said Dr. Janet Morrison, Provost and Vice President Academic. “We have made great strides forward in the past few years, including the establishment of our Indigenous Education Council, which is guiding us on ways to support the attainment, retention and success of Indigenous learners at Sheridan.”

Sheridan’s Academic Plan (2017-22), which sets out the college’s academic priorities, includes an explicit reference to Indigenous knowledge as a driver of quality teaching and deep learning, and commits to developing a variety of curricular and co-curricular activities to promote Indigenous learning and success.

Stephen Paquette, a traditional knowledge keeper and Chair of the Indigenous Education Council, co-signed the Protocol with Dr. Morrison, witnessed by Denise Amyot, President and CEO of CiCan.  Ms. Amyot, in her remarks, noted that signing on to the Indigenous Education Protocol is the start of a much longer journey. “Signing the Protocl is an evergreen process. Every time you believe that you have made progress, you realize that there are further steps to be taken.”

She pointed out the powerful role that CiCan members can play in truth and reconciliation, as 95% of Canadians live in proximity to a college or institute. “The Protocol is also an aspirational agreement that seeks to foster better engagement and understanding between Indigenous and non-Indigenous people.”

Currently, Sheridan has over 300 Indigenous learners in its community. “They are an integral part of our learning community, and we deeply value the experiences and learning they can share with us to enhance our understanding and empathy,” said Dr. Morrison. Two weeks ago, Sheridan celebrated the achievements of over 30 Indigenous graduates at its June Convocation ceremonies.

Also speaking at the event was Audrey Powless-Bomberry, an elected Councillor from the Six Nations of the Grand River, the largest reserve in Canada with over 26,000 residents. A retired educator, she described the success of a number of schools in the community that have blended Indigenous values, culture and language with a Western approach to education.

Sheridan’s Indigenous Initiatives Coordinator, Elijah Williams, himself a resident of Six Nations as well as a Sheridan graduate, served as emcee of the event, and noted that “Truth must come before reconciliation.” While there is a long way to go, he projected that “when Sheridan celebrates its centennial year [in 2067], it will look back on this occasion as a turning point in its history.”