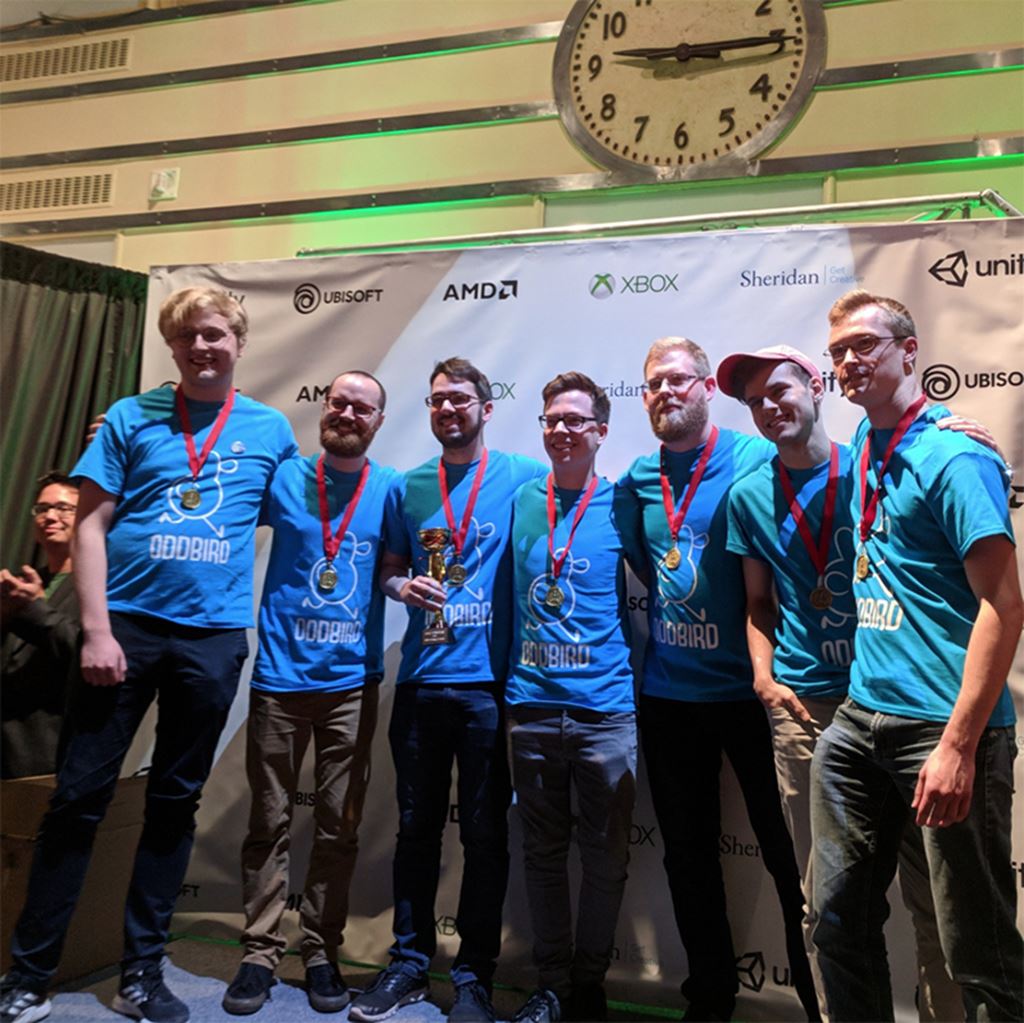 Oddbird Studio, a team of 4th-year students from Sheridan’s Bachelor of Game Design program, won the Best Overall category for their game, Super Random Heroes, at the Level Up Student Showcase recently held in Toronto. The team also took third place in the Best Art and People’s Choice categories. This is the second Best Overall prize at Level Up for the Oddbird team, who won the category in 2016 for their game, Arrow Heads.

Super Random Heroes is a game that accords players with random superpowers. “Every time you play it you receive random powers and combine them to create unique combinations,” explains Brendan Muir, a member of the Oddbird Studio team. “For example, during one play session you may throw bananas that light people on fire, and in another session, you might turn into a hammer that spawns banana peels.” The team, which will graduate from Sheridan this spring, plans to continue as Oddbird Studio on a full-time basis. “We are looking to partner with a publisher to help bring Super Random Heroes to PC and consoles. We also have a number of other projects under development,” says Muir.

Now in its eighth year, the Level Up Student Showcase brings together Ontario’s top postsecondary talent in the field of game design. Past winners of the Best Overall category have gone on to achieve commercial success, including Oddbird Studio, who created the Arrow Heads game when they were only in the second-year of the Bachelor of Game Design program. Arrow Heads was launched on Steam, a popular online gaming forum, in September, 2017.

This was the second big win for Oddbird this year. In March, they excelled at the EGLX Pitch Competition, receiving $30,000 in funding to support the further development of Super Random Heroes.  Previously, the team won the Entertainment Software Association of Canada’s 2016 Student Video Game Competition. And last fall, they won first place at Chillennium, an annual competition organized and hosted by students at Texas A&M University. Chillennium attracts competitors from around the world who are charged with creating a video game from scratch in 48 hours.

Muir and the Oddbird team credit the Bachelor of Game Design program and its faculty for playing an important role in their success. “The program reinforces the importance of design in game development, which may sound obvious, but being able to design a game, explore what makes it fun, and define its objective before you even touch any development software will greatly impact the outcome of your game – for the better!”, says Muir.  “Being able to share an idea with a professor who has industry experience and can provide meaningful feedback is invaluable,” he adds. “We cannot overstate how fantastic the faculty in the Game Design program are.”