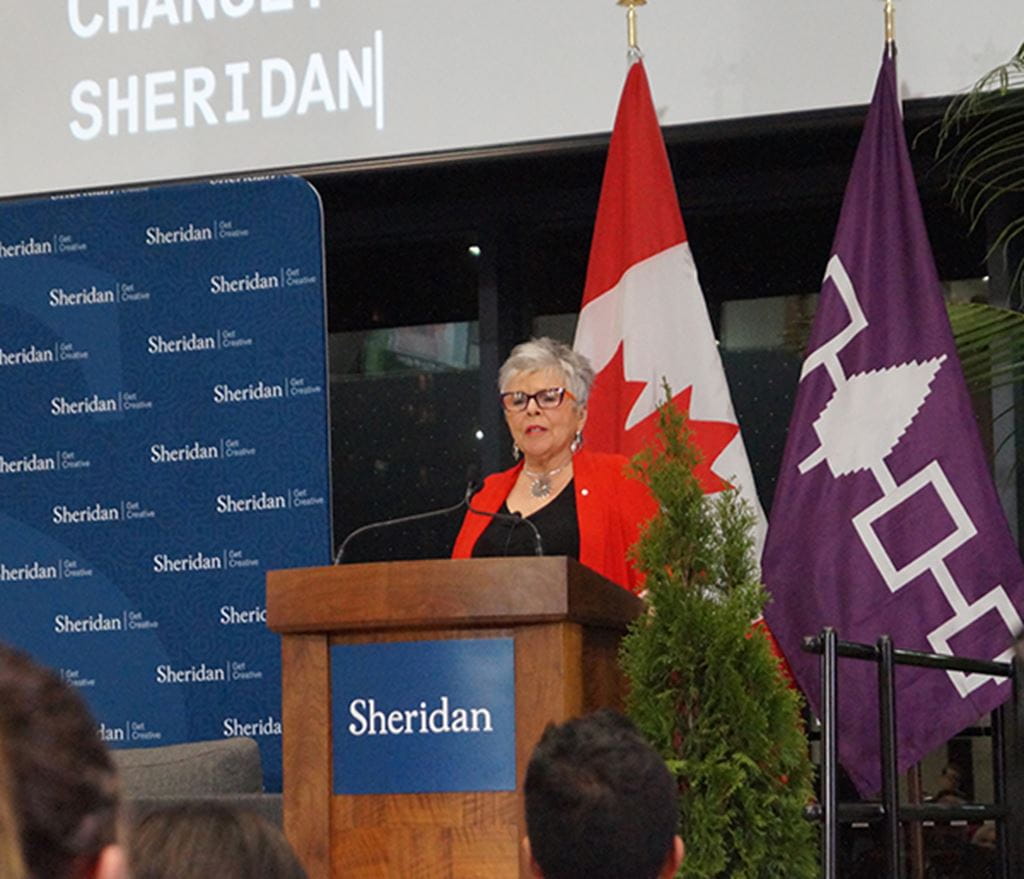 On Thursday, February 15th, Sheridan welcomed Indigenous leader, advocate, Officer of the Order of Canada and former Ombudswoman of Ontario, Roberta Jamieson, to its Hazel McCallion Campus in Mississauga.  Jamieson was the featured speaker in Sheridan’s ongoing Creative Campus Series, which is sponsored by TD Bank.  Jamieson’s address focused on the challenges of decolonizing Indigenous education.

Jamieson acknowledged Canada’s steps taken towards Truth and Reconciliation with its Indigenous peoples, but stressed that it’s just the starting point.  “What we need is clear recognition of the problem; a clear commitment to address it, and frank action to repair the damage of past governments and policies,” she said.

She explained the necessity of educating all Canadians on our shared history, enabling them to understand the systemic oppression across generations that has led to the current challenges faced by Indigenous people.  Detailing the experiences of those who lived through residential schools from Canada’s founding up until as late as the 1960s, she emphasized that “those actions set into motion an intergenerational legacy that has yet to run out.” 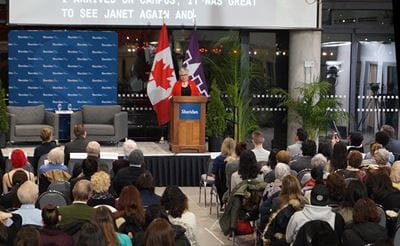 Indigenous communities should be empowered to celebrate their identities within the context of education from an early age in their own communities, Jamieson stressed, something that has been denied to them for too long. “Validating their traditional values, knowledge, language, and protocols encourages Indigenous people to hold on to their identity with pride and to make a difference in their own lives and those of others,” she said. She cited the work of her organization, Indspire, which helps preserve Indigenous knowledge and supports Indigenous learners in the K-12 system, investing in their success through scholarships and programming. “Education is the key to creating a future in which Indigenous people can make our own contributions, as Indigenous people,” she said.

As key historical beneficiaries of the colonial system, universities and colleges have an important responsibility to honour Indigenous knowledge and uplift Indigenous voices in education, said Jamieson. This includes ensuring Indigenous representation on their Boards and hiring committees, actively hiring Indigenous faculty and staff, integrating Indigenous wisdom into curriculum, and vitally, creating a welcoming and supportive atmosphere for Indigenous students, one that encourages their strength of identity. 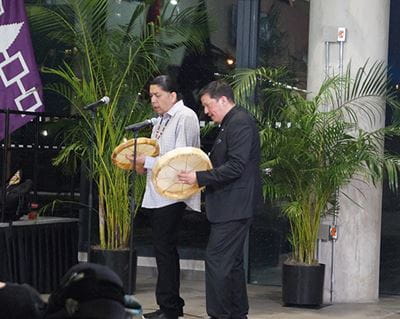 In closing, Jamieson challenged the audience, and Sheridan, to take leadership and action to support truth and reconciliation. “Reconciliation is a verb,” she said. “It requires institutional, structural, and societal change and sustained action.” This can include familiarizing yourself with the work of Canada’s Truth and Reconciliation commission, holding our political representatives accountable, and most importantly, reaching out to Indigenous groups and empowering them to lead these important dialogues. “I truly believe we have the power, strength and know-how to solve problems and create solutions in our lifetime for Indigenous Canadians, not leave it up to our children,” she said.

Following Roberta’s talk, Elijah Williams of Sheridan’s Centre for Indigenous Learning and Support moderated a question-and-answer session. The discussion touched on the particular role of women within the truth and reconciliation process, how young Indigenous people can make their voices heard, and how we might help new Canadians understand the unique experiences of Indigenous communities.

In her closing remarks, Janet Morrison,  Provost and Vice President Academic, thanked Roberta and reaffirmed Sheridan’s ongoing commitment to respond to the Truth and Reconciliation Commissions’ Calls to Action, including our mission to work with our Indigenous community partners to embed Indigenous education within our learning community.

Photo at top of page: Roberta Jamieson, Indigenous leader, advocate, Officer of the Order of Canada and former Ombudswoman of Ontario at Sheridan's Hazel McCallion Campus.

Pictured above: Roberta Jamieson, Indigenous leader, advocate, Officer of the Order of Canada and former Ombudswoman of Ontario at Sheridan's Hazel McCallion Campus.