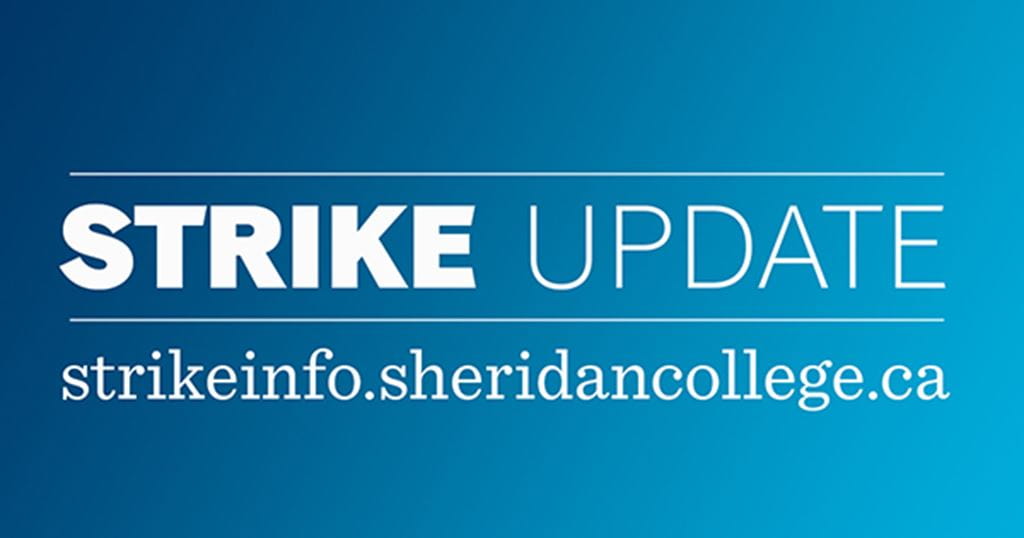 The strike by academic employees (faculty, counsellors and librarians) at Ontario’s 24 colleges, including Sheridan, is reaching the end of its third week.

All classes remain cancelled for Sheridan’s full time and part time students, while the majority of Continuing Education classes continue to run.  Sheridan’s campuses remain open with many services and supports running, including tutoring, library access, a number of workshops and access to many laboratories for independent learning.  The full list of what’s open and closed as well as answers to our most frequently asked questions can be found at strikeinfo.sheridancollege.ca

Sheridan has also made a number of recent announcements to its student body as part of its semester completion planning:

Sheridan may need to use the week of December 18-22 to make up for lost days of instruction.  With that in mind, the college has asked students to refrain from booking travel during this period if they had not done so prior to October 30 when the announcement was made.  The college further committed that no classes will run during the period of December 23-January 1 inclusive.

Sheridan is working to deliver the fall term by the end of 2017 to avoid an impact on subsequent terms.  No scenarios are currently being modeled in which the fall term is lost or restarted.  Depending on the length of the strike, it may be possible that part of the fall term may need to carry over to January 2018.

At the start of the strike, Sheridan cancelled all field placement activities, which was a difficult and carefully considered decision that was based on our commitment to student success.  It recognized the important role that faculty play in vocational learning and development.  It has since been determined that Sheridan has the requisite staff to support students’ learning in the field placements of several programs.  The following field placements will re-start as early as November 6:

Sheridan is not collecting fees from students while a strike is in effect.

Fees for new students who are beginning at Sheridan in January were due on October 11. This deadline has been extended to November 24.  That date will also be adjusted should a strike extend to that date.

Sheridan is also not collecting late fees that were charged for the fall term after October 16, which is the date that the strike began.

No exams will be scheduled and no assignments will be due during the strike, nor will any be due for 72 hours (including weekends) following the announcement that the strike has ended.  This decision has been made to allow students several days to re-engage in their learning and to return to campus.  Students are, however, encouraged to remain engaged in their coursework during the strike. Students will not be penalized for missing original deadlines that fall within the strike period.  New dates for assignments and tests will be communicated by faculty upon their return to work.

Anyone with further questions may contact Sheridan’s strike information hotlines via email at sheridanstrikehotline@sheridancollege.ca or by phone at 905-815-4070