Hundreds of Sheridan students and employees, along with community representatives, gathered at the Trafalgar Road Campus on October 2nd to commemorate Sheridan’s 50th anniversary with a multi-faceted special event, which featured the Colleges Ontario 50th anniversary mobile museum, along with a retro photo booth which drew attendees in for the opportunity to pose with props from the early days of Sheridan’s history.

Oakville Mayor Rob Burton was in attendance, and took the opportunity to offer “Congratulations to Sheridan for being the strong and vibrant force in our community that it has become.” He also praised the college for its role in opening the town to international opportunities. After participating in Sheridan-led missions to China, the Town of Oakville now has four sister cities in that country, Burton noted. “Many good things start here,” Burton said. “There’s real leadership here for our community.” 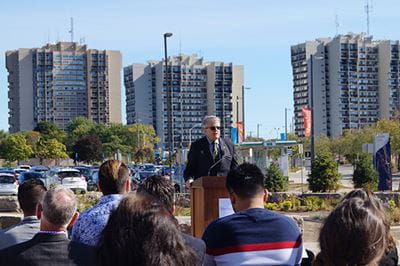 In her opening remarks, Dr. Mary Preece, Sheridan’s President and Vice Chancellor, noted that Sheridan has deep roots in Oakville. “Over the past 5 decades, we’ve built some of our most successful programs, including animation, music theatre and film and television, in Oakville. The Trafalgar campus is also home to some of our most exciting applied research with local industry and community partners, including the Centre for Elder Research, the Canadian Music Theatre Project, and the Centre for Mobile Innovation.”

Another highlight of the event was the official unveiling of the Medicine Wheel Garden, located adjacent to the J-Wing. The project was led by the Office for Sustainability with the design of the garden by landscape architect Paul O'Hara using the Medicine Wheel concept as suggested by Sheridan's Centre for Indigenous Learning and Support. The majority of the plants used are native to Southern Ontario and are pollinator-friendly. One of the main objectives of the garden is to increase biodiversity on campus as the site was previously overrun with the invasive Buckthorn species. The team from the Office for Sustainability worked to secure community partners, raise funds and organize its installation with the help of a group of volunteers.

“The garden is another example of our commitment to share indigenous ways of knowing,” said Elijah Williams from the Centre for Indigenous Learning and Support. “As we collectively move forward in our journey towards Reconciliation, it will serve as an important teaching tool for our students and the wider community.” It was sponsored by the Province of Ontario, TD Friends of the Environment Foundation, and the Oakville Community Foundation, with additional support from the Oakville Green Conservation Association.

To commemorate the college’s 50th anniversary, two Sheridan professors undertook projects documenting Sheridan’s history with the support of a SRCA (Scholarship, Research and Creative Activities) Growth Grant. Dr. Peter Kikkert’s history panels depicting Sheridan’s evolution over the past five decades were on display at the event, while Dr. Christian Knudsen’s social history documentary film about Sheridan was warmly received at its premiere screening.

Today’s event marked the culmination of a year-long celebration of Sheridan’s anniversary, providing an opportunity to reflect on all that has been accomplished over the past fifty years, while looking ahead to the future. “In looking back, it’s clear that creativity and innovation have been ingrained in Sheridan’s character from the start, and will continue to be our defining quality as we look to the next fifty years,” said Dr. Preece.