Somewhere in his basement, Randall Kapuscinski (Advanced Television and Film ’04) has a collection of fairly old Greek texts dating back to 1870s, a reminder of his passion for ancient history, literature, and an unfinished degree in Classics from the University of Victoria. 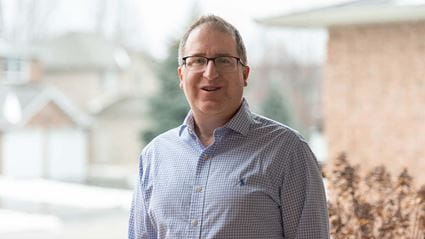 “I learned Ancient Greek and it was in fact the most enjoyable class that I might have had. I like to get to the root of things and I guess that’s what appealed to me about the classics focused on Greek and Roman history, art and languages,” he says.

Kapuscinski has come a long way from his history and literature days, and he wistfully admits that his Ancient Greek is now a little rusty. For the last 10 years, he has been teaching courses in transmedia and previsualization at the Faculty of Animation, Arts & Design (FAAD) at Sheridan, helping students to develop the necessary skills to integrate cross-platform approaches into media production. He is also the Program Coordinator for Bachelor of Film and Television (BFTV).

“If you had met me 15 or 20 years ago and said, ‘You're going to be coordinating one of the biggest and most successful film programs in the country,’ I would have said you're crazy!” he laughs, looking back on his eclectic career.

A search for new horizons, challenges

The unique combination of art and technology that defines Kapuscinski is by no means a happy coincidence but a nod to his constant search for new horizons and fresh challenges. He graduated from the University of Waterloo in 1992 with a degree in Mechanical Engineering and started his career working for a company associated with the Canadian Defence Base at Suffield, Alberta. His job included building computational models for the Canadian Navy that mirrored different kinds of blasts.

“The Navy was building a series of new naval craft at the time and needed to know if adjustments were required to the structure of the warships to decrease the possible impact of a nearby explosion on them,” Kapuscinski says.

“I'm extraordinarily proud of the work that the students do in class. The documentaries that they make are world class and some of them do very well at festivals.”

For a while, living in the small community of Medicine Hat, about 50 km from the Suffield defence base, and working on the Navy’s project was exciting, but that wasn’t what Kapuscinski wanted to do for the rest of his life. He explored areas of education he hadn’t had the opportunity to focus on while studying for his engineering degree and realized that he had a passion for ancient Greek and Roman art, literature and history.

Kapuscinski left his job to attend the University of Victoria to pursue a second undergraduate degree in the Classics, a subject at complete variance with his engineering degree. He says he enjoyed his time at university, discussing in class the history and origin of words in the Latin and Greek languages, while also holding a part-time job at the University’s Fine Arts Computer Lab. When his co-workers launched a company of their own, UWI.com (later renamed PureEdge), Kapuscinski put his studies aside to join them as an Internet technology consultant. For three years, he travelled extensively as the job gave him the opportunity to see the world, which included India and South Africa.

In the spring of 2001, the company relocated him to Manhattan and while he was on a visit to Victoria, 9/11 happened, throwing Manhattan and the world into chaos. Kapuscinski drove all the way from British Columbia to Manhattan to get his belongings and bade goodbye to the city.

He also left his job. “I guess an event like that is life-changing. It made a lot of people at the time re-examine their lives. I decided that I should do something that I did have a passion for: that I shouldn't necessarily go back to what I was doing before. It would have been super easy at the time to get another job as I had a lot of experience. But I didn't want to do that,” he says.

Kapuscinski decided to go to film school and in 2003, he joined the Advanced Television and Film program (ATVF) at Sheridan and studied Camera and Lighting under acclaimed cinematographer Richard Leiterman. The following year, he was hired as the lead technologist for the program and guided its transition from high-definition videos to tapeless workflows and digital cinema technologies.

Despite having a job he loved, Kapuscinski couldn’t resist the lure of newer adventures, this time in the area of app development. He left Sheridan in 2011, launched his own company Ripple Digital Media, and was contracted to develop several mobile applications and eBooks, including iBard Romeo. A year later, he returned to Sheridan as a professor and has been teaching at FAAD ever since.

“Sheridan is a fairly unique institution. It has so many top tier programs in the arts, and not just the film program.”

What excites Kapuscinski the most about teaching is his interaction with the students and the energy they bring to the campus. He leads one of the third-year production courses and works on documentaries with the students. “I'm extraordinarily proud of the work that the students do in that class. The documentaries that they make are world class and some of them do very well at festivals,” he says.

The film program at Sheridan is unique as it is cross-disciplinary, he says. “I think Sheridan is a fairly unique institution. It has so many top tier programs in the arts, and not just the film program: we have associations with the visual effects class and if I need to talk to somebody about gaming technology, we have a fantastic gaming program, and the animation program: it just goes on and on. There's so much depth at Sheridan, so there are so many opportunities for cross-disciplinary ideas,” he says.

Always eager to embrace innovation, Kapuscinski and his team currently have the welcome mat ready for the cutting-edge technology that’s been credited with the runaway success of Disney’s 2020 Emmy Award winning film the Mandalorian. For nearly two years, Sheridan’s Screen Industries Research and Training (SIRT) Centre has been heavily involved in virtual production and recently launched a Virtual Production Innovation Hub. The technology is now making its way from the research incubator to campus and technical crews from BFTV and ATVF have been setting up the camera gear at Trafalgar to test virtual production setups in preparation for work on ATVF students’ films this winter.

“It’s thrilling to see such significant strides forward in our programs, and this kind of an approach will have a profound effect on some of the curriculum that we offer at BFTV in the next few years.”

“I'm incredibly excited to see what they're putting together, and we have really some fantastic camera equipment at Sheridan for students to use: we have cameras and accessories that many professional shows and films use and the equipment has the ability to talk in real time to game engines in order to facilitate these virtual production workflows. It’s thrilling to see such significant strides forward in our programs, and this kind of an approach will have a profound effect on some of the curriculum that we offer at BFTV in the next few years. Ultimately, it might really open up additional creative opportunities for film students,” he says.

Kapuscinski delivers the health and safety module for incoming students and keeps his ear to the ground on developments in the industry, such as the accident last year in which cinematographer Halyna Hutchins was fatally shot and director Joel Souza injured on the sets of the film Rust when a prop revolver discharged a live round while being used by actor Alec Baldwin.

“We're pretty proud of the measures and procedures we have in place for the film students in terms of health and safety,” Kapuscinski says. The BFTV curriculum has a health and safety module for the first week of the program and students are not allowed to use non-firing weapons until the third year, and only after attending a session with a professional armorer.

Inevitably, students pitch projects that involve non-firing replica handguns and whenever they do that, they're required to discuss the use of the weapon with their faculty supervisor and ensure that they have all the proper measures in place that correspond to what they would have learned from the professional armorer, Kapuscinski says.

From Homer and Plato, Greek and Latin, e-books and apps to prop guns and virtual production – Kapuscinski says he has had many careers and found that his heart lies in teaching. “I'm perhaps the only faculty member who doesn't have a pedigree, and film or television production background. I still find it amazing to see where I've landed, but it all works very well,” he says.