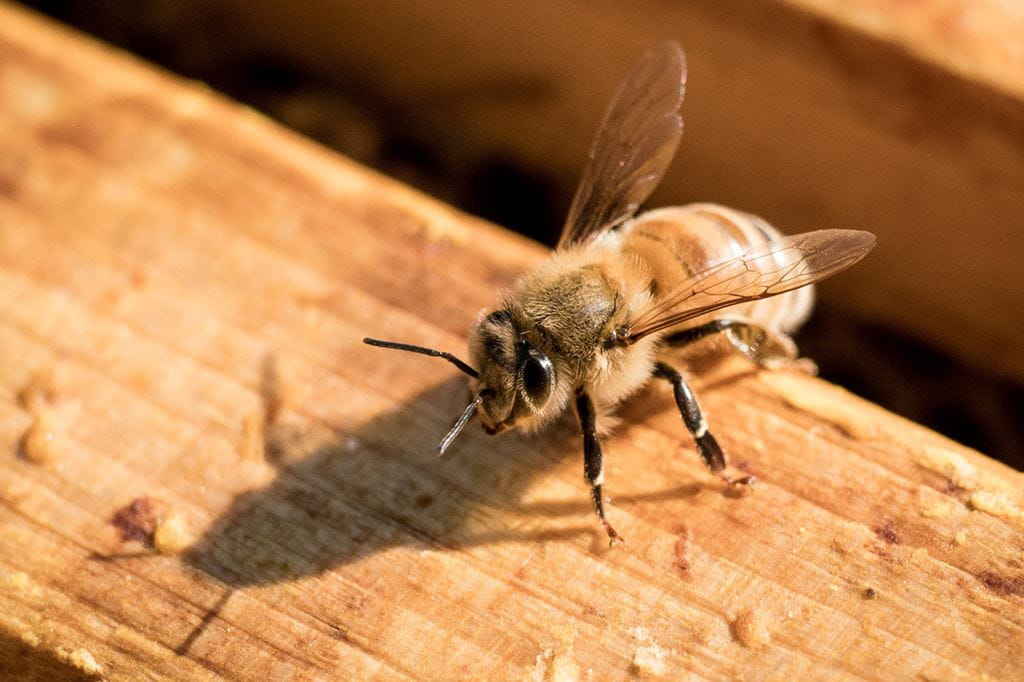 An unlikely team – comprising an information technology professor, a photographer, and a game design graduate – has come together for the love of bees to give the pollinators a permanent home in Sheridan’s lush green spaces and woodlots.

Adding a sweet note to the College’s sustainability initiatives, the Sheridan Student Union (SSU), led by its president Kyle Budge (Bachelor of Game Design ’20), joined Ted Parkes, photographer/cinematographer who studied at Sheridan and now owns Teddy Bee Honey, and Professor Anna Wachholz of the Faculty of Applied Science and Technology (FAST), to bring four hives to Sheridan this summer.

The partnership has been one of synergy and serendipity, allowing the SSU to finally realize its two-year-old dream of bringing bees to Sheridan. While SSU invited Parkes’ company to install and maintain hives on campus, Wachholz secured seed money for it through an internal grant for her research proposal on bees at Sheridan. The SSU team worked in close coordination with Dan Casey, Senior Manager, Hospitality and Operations, and the Facilities department of Sheridan to bring the project to fruition.

The campus is already buzzing with plans for the bees: the SSU is exploring the installation of a Go Pro camera to livestream the hives 24/7 and provide a web link to anyone who’d like to watch the activities in the hives from a safe distance. Also in the works is a social media campaign, which would invite SSU followers to ‘Name the Queen’ in each of the four hives. A virtual visit to the hives is slated for August, organized by Sheridan Alumni to allow visitors to look inside the homes of Sheridan’s bees, learn about the social structure of the hives, and the important role they play in pollination.

“We wanted a green initiative of our own to help with sustainability on campus.”

“We wanted a green initiative of our own to help with sustainability on campus,” says Budge. “We also want to have some sort of interactive ability so that students get involved and see what's happening in the hives, but not up close and personal, which could potentially disrupt the bees.” The hives have been located off the beaten paths to allow the bees to go about their business in peace.

The nucleus hives, set up in July on the Davis and Trafalgar campuses, house approximately 15,000 bees each. The colonies are expected to grow to 50,000 each over the summer, each producing up to 30 kg of honey, some of which will be used by student food services, every year.

Parkes is now keeping a watchful eye on Sheridan’s new wards to ensure they continue to thrive. He says the abundant green spaces on campus provide an ideal habitat for the bees. “There’s a big pond at the Davis Campus and also fruit trees and ornamental plants that the bees love to forage on. Same with the Trafalgar Campus with its gardens, flowers and trees,” he says. Interestingly, the urban location of the two campuses is an added bonus as bees are known to do very well near houses and gardens, he says.

Parkes took to bees some 11 years ago, just as the world was beginning to notice the importance of pollinators in food security. Bee colonies across the globe were collapsing for reasons that ranged from indiscriminate use of pesticides and shrinking green spaces to diseases that afflicted hives. The reduction in bee population had a direct fallout on food crops, setting off alarm bells in the farming community. “I wanted to do something, so I thought, why not raise some bees in my backyard and hopefully contribute to the survival of the species,” he says.

Parkes started with just two hives in his backyard. A rural Ontarian who grew up on a farm, Parkes dived right into his new passion and soon realized that but for their size, bees are like any other livestock. “I really kind of fell in love with both the process of beekeeping and the continuous learning aspect of it. It just snowballed from there to the point where it became an ongoing business,” he says.

“There’s a bit of zen to working with bees. There's nothing more relaxing to me than a sunny summer afternoon, listening to the bees as I work around the hives.”

Parkes now markets honey from the 40 beehives he owns. As a freelance photographer, he has the flexibility to be a beekeeper whenever the hives need him. “Eventually, I will probably get into full-time beekeeping, but at the moment we're growing slowly and steadily,” he says. “There’s a bit of zen to working with bees. There's nothing more relaxing to me than a sunny summer afternoon, listening to the bees as I work around the hives.”

Parkes believes creating awareness about honeybees is an important step toward protecting the environment. Until 2019, for four years in a row, he set up two booths at the CNE, one of which was an educational display at the Farm Building where children could see the inner workings of a beehive and try to locate the queen bee.

“They were full of questions about bee colonies and we always had a beekeeper on hand to respond to them,” Parkes says. Not only has there been an uptick in the interest in bees, the importance of local produce as a means of sustainability has put the focus on locally produced honey. “People realize how important the bees are and how important it is to support local businesses,” he says.

As an information technology professor, Wachholz knew nothing about the bees that intrigued her with their endless buzzing in her backyard. Then came along a chance to apply for a Scholarship, Research and Creative Activities (SRCA) Growth Grant, offered by Sheridan to provide opportunities for faculty members to pursue passions outside their fields of expertise. She decided to turn her curiosity into a formal project and submitted a proposal on the benefits of introducing bees in Sheridan’s green spaces. It was approved, with seed money to install beehives on campus.

“I walked in with zero experience and I have learned so much. I’ve been teaching IT and business, so bees were really out of my field of expertise. I had no idea how much I would learn about the important role they play in our lives. It has been great to work on something which is so out of the norm for me,” she says.

“We just can’t hope for the hives to survive on their own. They have to get adequate sun in the summer; be sheltered and fed during winter; and protected from pests and predators at all times.”

With Parkes lending a hand to maintain the hives, Wachholz is confident that the project will be a success. Her extensive research has also made her empathetic to the plight of the bees, who are facing numerous challenges to their survival as a species.

“We just can’t hope for the hives to survive on their own. They have to get adequate sun in the summer; be sheltered and fed during winter; and protected from pests and predators at all times. It is sad to see that sometimes hives are demolished or set on fire, but mankind is not the only predator they face; raccoons and skunks too destroy beehives,” she says.

However, with proper precautions in place, well-protected hives are proving to be a huge success.

Wachholz believes that bees have a calming effect on their surroundings. “They don’t want to hurt anyone, unless provoked. All they want is to do their job peacefully,” she says, with a renewed understanding and respect for the bees buzzing about in her backyard.