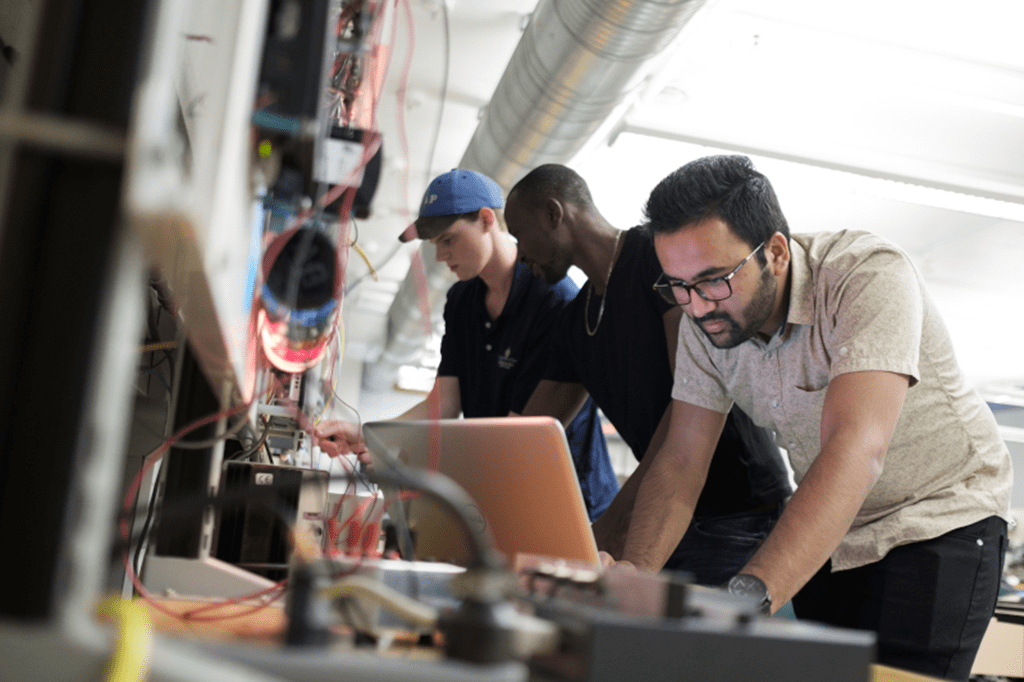 For many Canadians, flashbacks to March 2020 conjures images of panic buying and empty grocery store shelves.

However, the onset of the COVID-19 pandemic affected the food supply chain in other, less obvious ways.

During the first wave, Canadian farmers experienced many difficulties hiring temporary foreign workers due to border closures and travel restrictions. Those challenges, which were compounded by stress, production delays and new costs, caused Canadian farmers to lose $2.9 billion in sales in the first year of COVID, according to research conducted by the Canadian Agricultural Human Resources Council (CAHRC).

George Balyasin, a Guelph-based entrepreneur with a background in aerospace engineering, an interest in robotics, and a penchant for gardening, was keenly watching media reports detailing the struggles of Canadian farmers. “I was struck with the idea to develop a machine that could take on some of the more autonomous harvesting tasks on farms to reduce labour shortages,” he says.

Together, he and a colleague set out to launch Acrebot, an agricultural robotics company aimed at developing a vision-guided robot, capable of identifying and harvesting tomatoes, bell peppers and cucumbers — vegetables that make up the largest share of greenhouse vegetables grown in Canada. They hoped that by developing an autonomous robotic greenhouse produce harvester, they could eventually close the gap in greenhouse labour requirements.

“A new startup might not have the funds to afford their own industrial robot yet, and they need to show their product’s potential to potential investors. At CAMDT, a company can try their systems out to see if they work, and they have a team of experts to help them along the way.”


But while Balyasin and Acrebot co-founder Diana Pfeffer had a vision, they needed the technology and a team to help bring it to life.

When Acrebot first began working with Sheridan in August 2021, the company had already developed a vision system for the robot to recognize the veggies.

“A company will take photos of a million tomatoes, and a million non-tomatoes, and then they show it to the vision system,” explains Ramzy Ganady, a research technologist with CAMDT and the principal  investigator on the research project. “We tell the system which is which, and then eventually the robot learns to recognize it.”

By working with CAMDT, Acrebot was able to gain access to the actual robots to put their vision system to the test. Ganady, along with a team of three student research assistants — Mohamed Kasim (third year, Bachelor of Mechanical Engineering), Darius Inniss (Mechanical Engineering Technology ‘21) and Yashkumar Rajeshbhai Patel (Mechanical Engineering Technology ‘21) — helped establish the communication between Acrebot’s vision system and CAMDT’s system. From there, they also iterated and prototyped Acrebot’s design for the robotic arm’s end effector that would be able to grab the vegetables and cut off their stems, and then deposit them into collection boxes.

“Ramzy and the CAMDT team were really able to help us take the system across the finish line,” says Balyasin.

And while many industries are stabilizing post-pandemic, Acrebot’s harvester robotic system remains a much-needed technological advancement for the agriculture industry. Agricultural sectors are facing a long-term, structural shortage, with CAHRC estimating that Canada will face a shortage of workers for an estimated 123,000 agricultural jobs over the next eight years.

To help further develop the concept, once Acrebot has secured additional funding, the company will continue to work with  CAMDT to build a mobile system or moveable track so the robot can move through a commercial greenhouse or travel through warehouses.

“When a company approaches CAMDT to take on a project, we’re really able to de-risk their investment since we have robots in house that can test a company’s prototypes,” explains Ganady. “A new startup might not have the funds to afford their own industrial robot yet, and they need to show their product’s potential to potential investors. At CAMDT, a company can try their systems out to see if they work, and they have a team of experts to help them along the way.”