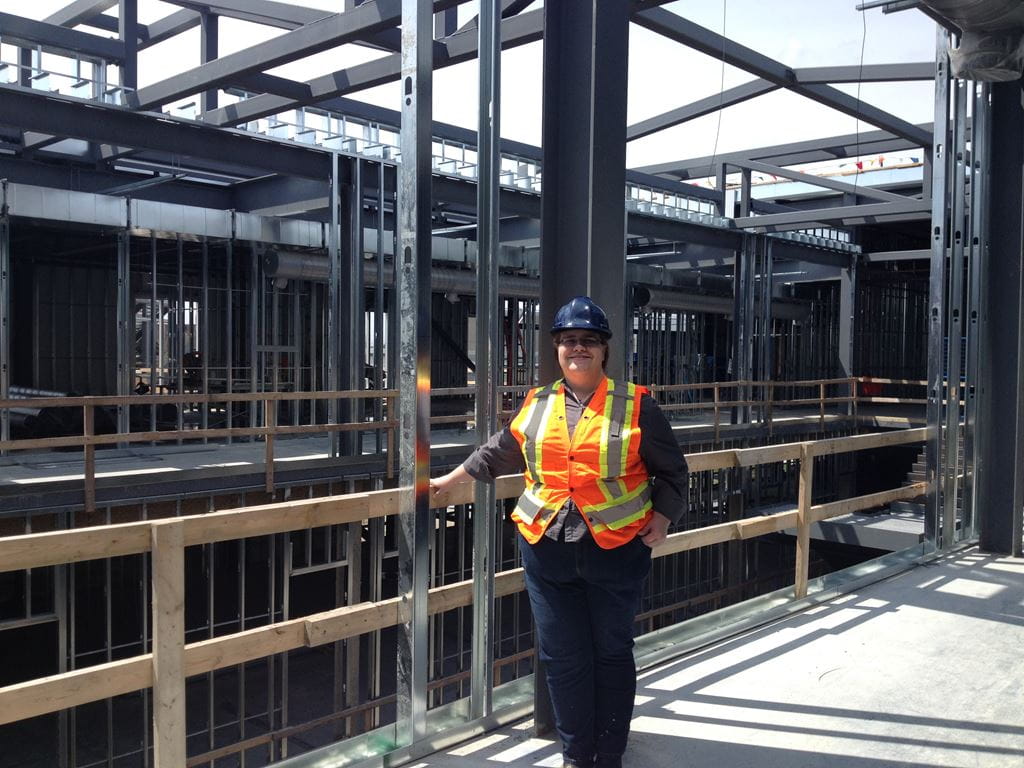 Barbara Smith, Facilities Services Project Manager for the new A-wing building under construction at the Davis campus, gives a rather unexpected answer when asked to describe the most challenging aspect of her job.

“I was surprised to learn that the trickiest part of my job is often managing information,” she says. “There’s a huge amount of information coming in on a daily basis associated with a project of this scale. I need to keep that information organized, get it to the right people, and be able to digest it in order to help make strategic decisions about the project.”

“There’s a huge amount of information coming in on a daily basis associated with a project of this scale. I need to keep that information organized, get it to the right people, and be able to digest it in order to help make strategic decisions about the project” – Barbara Smith

Smith graduated from McMaster University with a Bachelor of Engineering in 2007. Upon joining Facilities Services at Sheridan as a Project Coordinator about three years ago, she supported several small projects throughout the college, including classroom and washroom renovations, the installation of new cameras in the trail system at the Trafalgar campus, landscaping, signage, and refurbishment.

In late 2014, Smith was approached about taking over a much bigger project: overseeing the construction of A-wing, the new building at the Davis campus in Brampton that will eventually be home to all of Sheridan’s Skilled Trades and Apprenticeship programs. At 130,000 square feet and three stories, the new A-wing will be the second largest building at the Davis campus, featuring 22 moveable/flexible general use classrooms, and dedicated workshops for plumbing, electrical, machining, industrial mechanic millwright, welding and construction skills.

In her role as Project Manager for A-wing, Smith constantly facilitates the flow of updates, requirements, documentation and questions between a multitude of stakeholders. These include the construction company, Giffels; the City of Brampton; and the Sheridan community, including Sheridan’s corporate planning team and other departments supporting the project. She oversees a small team in Facilities Services that make up the A-wing project team. This includes Ken Navalta, who graduated from Sheridan’s Architectural Technology program in 2014, as well as Interior Design co-op student Alexandra Bekkers.  Other subject matter experts in the Facilities team are involved as needed.

Her work with Giffels requires her to ensure the project is on schedule, negotiate any changes to the building, and verify that the building is compliant with Sheridan’s specifications as it is constructed. She’s also the main contact point for other external partners or vendors on the project, including consultants.

Internally, Smith and her team must also manage any day-to-day impact the construction may have on the Davis campus and keep the Sheridan community up-to-date. This involves frequent coordination with Sheridan IT, Security, Occupational Health and Safety, and Communications. Smith and her team also work closely with the Faculty of Applied Science and Technology, as preparations are made for the move of the programs at the Skills Training Centre in Oakville to their new home at Davis.

This amounts to a role that calls for a strong project manager and a great communicator, skills that have helped Smith keep the project on budget and on schedule.

Her favourite part of the job? “I enjoy working with the building plans and visualizing how the building is going to look,” she says.

As A-wing nears its January 2017 completion date, Sheridan’s staff, faculty and students won’t have to wait much longer to see the vision for the new building take form.

Pictured above: A-Wing Project Manager Barbara Smith with the new building under construction at the Davis Campus