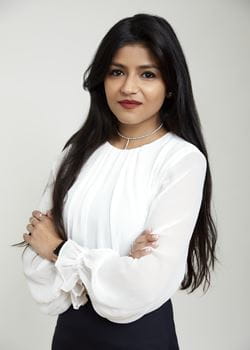 Born in India, raised in Nigeria, an international student at Sheridan, and now a proud Canadian – Aanchal Vashistha (Digital Communication, ’13) knows what it is like to live across cultures that span continents. She understands the single-minded resolve that’s needed to pursue education in a distant land, the courage to face unfamiliar challenges, and the incomparable joy found in new freedoms, friendships, and learning at school.

Vashistha also sees what many may miss – the invisible backpacks students carry, saddled with their loved ones’ expectations and their own intense desire to succeed against all odds. Vashistha has carried that load, and was relentless in her quest to do better in class, earn more money, and make her parents proud. Now, when she looks back on her experiences, she says happiness and mental health must come before money and success.

“Success is important. But besides success, I believe fulfillment is equally important. Life is not just about chasing money, it's also about adding value and making a difference in the world while you're making money,” says Vashistha, who is now an award-winning author and founder of Reach Out Together, a non-profit organization based in Toronto that provides people with the tools and education to maintain strong mental health. She has been mentored by the legendary Jack Canfield, author of the Chicken Soup for the Soul series, and co-authored a book with him, titled Success Strategies. She has also has been featured as a mental health activist on leading networks including NBC, CBS, FOX, and ABC.

Vashistha’s commitment to mental health is rooted in her own experiences, including a personal tragedy. “I had an older brother who passed in Nigeria due to malaria, just when he was about to leave for Canada for further education. And that's when I took it upon myself to live out his dream. I told my twin brother Tushar that we’d both go to Toronto and that we’d find our way there,” Vashistha recalls.

Vashistha and her brother came to Canada together to study at the University of Toronto (UofT). Determined to set herself up for success, Vashistha joined Sheridan’s Digital Communication program, while simultaneously pursuing her degree in Digital Enterprise from UofT. At the same time, she worked full-time hours to avoid being dependent on her parents for tuition and living expenses.

“I just wanted to make my parents proud at that point. I wanted to be financially independent. I wanted to prove that I could do anything. The truth is, we had a hard life growing up, my parents didn't come from a lot of money. We saw them working very hard to get to where they did to provide for their family. So for me, it was all about realizing my parents’ dreams, to make money, and to really elevate the quality of our lives together,” Vashistha says .

“Success is important. But besides success, I believe fulfillment is equally important. Life is not just about chasing money, it's also about adding value and making a difference in the world.”

Sheridan, with its diverse student population, opened up a new world for her. Her Indian ethnicity and restrictive upbringing in Nigeria had kept Vashistha confined to a single racial and social group before she came to Canada.

“I absolutely loved Sheridan because it was so multicultural. For the first time in my life, I got to know about different communities and cultures. As I made friends on campus, I realized that as people, we connect with others because of our experiences and not due to our cultures or backgrounds,” Vashistha says.

After graduation, the twins found jobs in their profession and bought a condo together. For new graduates, she thought they were doing very well.

It was then that Vashistha’s world fell apart. Her brother took his own life in the condo they had so lovingly purchased. “He was 24 years old and we were international students. We didn't have any family here. We had no one who could even help with organizing the funeral. Also, our work permits had expired and our permanent resident applications were pending,” Vashistha says, recalling that terrible phase of her life.

“We grew up in this toxic masculinity culture that we tend to promote with statements like ‘boys don't cry.’ Or, ‘boys just figure it out."

Vashistha says her brother’s extreme step had followed his struggles with mental health and his refusal to seek help due to the social stigma attached to his condition.

“We grew up in this toxic masculinity culture that we tend to promote with statements like ‘boys don't cry.’ Or, ‘boys just figure it out.’ Even when my brother realized that something was wrong and that he needed help, he didn’t reach for it because he was worried about what people would say, or what mom and dad would say,” Vashistha says.

Her brother’s death, in part the result of the social stigma around mental health issues, changed Vashistha’s belief that success and money ensure happiness. She decided to devote herself to creating awareness about mental health and providing supports to those struggling with it. “It was evident to me that our community lacked knowledge about the mental health space. For the first time, I realized that my parents couldn’t have been doing very well either. They never had any support even though they had had a tough life that centred on their children, and then they lost their two sons. That realization was the start of my new journey to take my knowledge to my community,” she says.

Eight months after the terrible tragedy, Vashistha became certified in mental health first aid from the Mental Health Commission of Canada and started hosting community events and workshops in different provinces to try and break the cultural stigma against mental health issues. The response from the South Asian community was overwhelming, earning her a shout-out from Calgary Mayor Naheed Nenshi on social media when she organized an event for seniors in that city.

Despite her progress, Vashistha’s interactions with the community also reinforced for her that students lacked knowledge about mental health and awareness of the services and supports available through government programs and at their schools. In 2018, she launched her not-for-profit organization Reach Out Together, which promotes mental health awareness and well-being through interactive and educational programs.

“I absolutely loved Sheridan because it was so multicultural. For the first time in my life, I got to know about different communities and cultures.”

“The practical education I received at Sheridan helped me a lot. Everything in the program was based on case studies …. and it set me up to be able to launch my own initiative,” she says.

The response to Reach Out Together’s programs has been tremendous. Over 400 people attended a virtual conference Vashistha organized last year, many of them contacting her later for advice and help to overcome their mental health challenges. Vashistha’s initiative goes beyond presentations and conferences: Reach Out Together has a trained Resource Support Program team that follows up on the emails it receives and after thorough research, customizes resources for those looking for help.

“It could be online therapy, online counseling, or it could be in-person as well, if that is permissible in view of the pandemic. We also follow up with them, to make sure that they are actually pursuing that help or they're feeling encouraged to keep going on and get well,” she says.

“My only purpose in life now is to help others get over their mental health challenges and to remove the stigma around it by promoting awareness. For me, success is not about having my book on a bestseller list,” she says. “My success is in knowing that I’ve pulled someone back from the brink by motivating them and helping them to get the supports they need to lead a healthy life.”

Are you a graduate looking for support? Visit the Canadian Mental Health Association for information on resources in your community, or find out more about resources available at Reach Out Together.