Children find it easy to talk to Steven Botelho’s (Illustration ’05) puppets. These ragdolls, put together with pieces of foam, fur and fleece, connect with kids in a way their family or friends may not be able to. They help them explore the thoughts and behaviours which they worry set them apart from the others around them. The puppets create a safe space for kids to have a dialogue, specially for those who may have questions about their mental health. 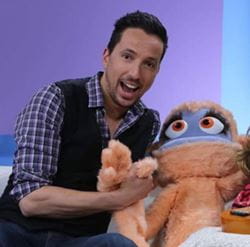 The puppets are part of Botelho’s show for schoolchildren in grades 3-6, Our Space Safe Space, which he created to bring awareness and more acceptance around mental health and disabilities. With the help of about 30 puppets, each representing a mental health condition, Botelho breaks down communication barriers with children and initiates conversations around a topic which is highly stigmatized.

Puppets break down barriers to dialogue

“I use puppets to bring a lightheartedness to the issue because when you open up the conversation about mental health, it's always a serious subject. In my experience, when people hear the term ‘mental health,’ they don't hear ‘health.’ They just hear ‘mental’ and that scares them,” says Botelho.

“Growing up, whenever I wanted to open up, I would get shut down. I want the conversation about mental health to be easy.”

Botelho has lived with depression and severe anxiety most of his life and understands the inability of those in need of mental health supports to reach out for help. “Growing up, whenever I wanted to open up, I would get shut down. I want the conversation about mental health to be easy, like the one we're having right now, and to let the kids know that it's okay to struggle with whatever you're struggling with,” he says.

It is indeed easy for children to connect with Botelho’s lovable, funky dolls: among them is Dee Pression, ‘the sweetest little girl with a lot on her mind’. In one of his shows, Dee confides in Botelho how she doesn’t want to get out of bed or do anything at all. “I understand because sometimes I have the same thoughts. I can help you understand what you are thinking and help you change these into positive thoughts…when I had those thoughts, I pushed myself to do something I loved,” responds Botelho, his words bringing acceptance and counsel to anyone in his audience who may be experiencing similar feelings.

As the puppets, including the forever anxious ‘Anne Ziety’; the autistic ‘Auddy Sim’; dyslexic ‘Lexi’; and ‘Able Dixion Hoopie Dissy’ (ADHD), play out their unique behaviours, Botelho subtly draws his young audience into a dialogue. He says many children walk up to him after the show, to thank him for understanding something they’ve struggled with for a long time. He also receives emails from the students and their parents, asking for more information on some of the topics touched upon during the show. He says such a response shows how these conversations play an important role in creating an acceptance and understanding of mental health issues.

“I want to let kids know that it's okay to struggle with whatever you're struggling with.”

“It hasn’t been easy to take my show to schools. Initially, I was shut down by principals who would say children didn’t need to hear about ‘that kind of stuff,’ or that ‘these kids are too young to know about it.’ I kept on getting rejected till I took my proposal to the Toronto District School Board. Through my shows, I let kids know that no matter what, you are who you are meant to be, and you must love yourself for that,” he says.

Botelho says the Illustration program at Sheridan helped him develop the art of connecting with children. “The program didn't really have anything about puppetry, but it helped me learn about the art style that’d appeal to children, or just the genre of youth and young adults,” he says.  The program also taught him about book illustration, which he used to launch his career after graduating from Sheridan.

Even while he worked in illustration, Botelho continued to nurture his passion for puppets which went back to his early childhood. Inspired by Jim Henson’s The Muppets, he had built his first puppet at age 12.  However, it was only years later, while working for famed puppeteer and creator of Sesame Street’s Big Bird and Oscar the Grouch, Caroll Spinney, that he realized he could use puppets to not only tell his own story, but to also help children going through similar experiences.

“I figured what better way to utilize all my skills in drawing and puppetry, than to create a different dynamic for children to help them grow up, to become themselves, and to love themselves for who they are.”

“About seven years ago, while we worked together at a comic convention in Niagara Falls, Spinney gave me his autobiographical documentary to watch. It traced his earliest collaborations with Jim Henson and his journey from being a bullied child to becoming a childhood icon,” Botelho says.

Loving oneself despite mental health issues

“I watched it and started crying. I realized it was time for me to tell my story,” Botelho recalls. “I saw myself in him and his journey. I have really bad social anxiety, depression and lot of other stuff that hindered me from pursuing my careers and being confident in myself. But I’ve accepted it all. So I figured what better way to utilize all my skills in drawing and puppetry than to create a different dynamic for children to help them grow up, to become themselves, and to love themselves for who they are.”

In addition to schools across the province, Botelho’s show is now available on YourTV in the Halton region. He has just finished filming Season Two for another local channel which provides coverage from Milton to Kingston. Two years ago, he published his first illustrated book, Let’s Meet Able Dixion Hoopie Dissy: An Our Space Book. He is an instructor in the Visual Arts and Musical Theatre Performance and Drama programs at Art House, a not-for-profit charitable organization, which provides free arts-based programs for children and youth who have little or no access to these activities for economic reasons. He is also a Children’s Art Instructor at Visual Arts Mississauga (VAM).

“I could be considered an extreme mental health advocate, but I think I am a self-love advocate. I grew up hating myself. I was afraid and scared, and I didn't like who I was or knew who to talk to about all this stuff.  I felt I didn't belong. It's easier now because these are parts of me that I've accepted. It is my life’s mission now that no child grows up feeling the way I did, to make sure that everyone knows that all of us struggle with something or the other. And that it's OK to talk about it because that’s who we are and we shouldn't shy away from it,” he says.