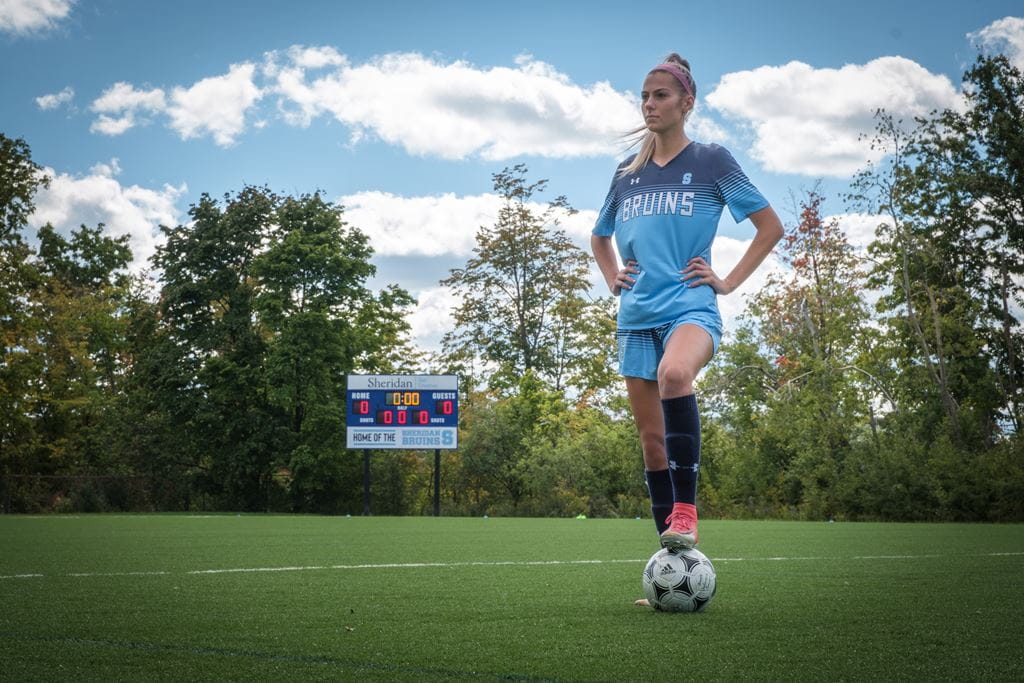 Acing it on the field and in class

Since joining the Sheridan Bruins’ team in early September, the 21-year-old athlete has been taking the Ontario Colleges Athletics Association (OCAA) by storm. She was the regular season leading scorer in the OCAA Central Division this fall, and she scored more goals in six games for Sheridan than the team’s leading scorer did in 10 games last year.

It’s Derkach’s fourth and final year at Sheridan, but it’s her first year playing for the varsity soccer team. When asked why she didn’t join the team earlier, the semi-professional and former rep player cheerfully professes her love for her other passion in life: school.

“My education is so important to me,” she says. “I didn’t play earlier because I always put my academics first.” But Derkach quickly discovered the ‘study-first’ mentality among Sheridan athletes meant she didn’t have to sacrifice her schooling. “They take academics very seriously here, but the Bruins community is so tight-knit and supportive. Great coaches and teammates make it easy to excel.”

Since joining Sheridan in 1988, Angelini has strived to bridge the often age-old divide between varsity athletics and post-secondary academics. He spends his summers travelling across Ontario, recruiting athletes whose academic values align with those of Sheridan’s. Just because one is a superstar on the field, doesn’t mean one’s grades have to suffer, Angelini says.

“New students are often aghast at how much emphasis is placed on academics here at Sheridan,” Angelini says. “We have a vast network of support tools in place to help our athletes succeed in all aspects of their Sheridan journey. We have mandatory study hall sessions for our athletes, and all rookies are assigned an academic coach to help them with their studies.”

In fact, Sheridan is the only college in Canada to employ a full-time Varsity Academic Advisor to help mentor its students. In addition to these support systems, Sheridan also offers the Sky Blue Endowment Fund, a scholarship that was established in 2001 to help support student athletes.

“I have the same attitude with my schooling that I have with soccer: I want to be on that leaderboard. When I have a goal, I am determined to make it happen. I’ve always wanted to be a teacher. There’s just no other career path for me, so I won’t let anything get in my way.” – Zoe Derkach

Sheridan’s ‘study-first’ philosophy began to take off approximately 20 years ago, when Athletics Director Jim Flack joined the college. Flack, who was previously a high school teacher, grew up in a household devoted to education; his father was a schoolboard superintendent and his mother was a teacher. He and his three brothers were also varsity athletes.

“Athletes need to be held to a high standard; I’ll never accept the commonly held belief that when it comes to athletics and academics, you can only excel at one or the other,” says Flack. “Sheridan has so many strong academic offerings. When I came to Sheridan, I wanted to foster a community of student pride, where there was a collective identity for the Bruins community – as both athletes and successful students.”

The Sheridan Bruins community has since adopted the following mantra: Study. Compete. Graduate. Succeed. A mentality that echoes throughout all campuses.

“The Sheridan community truly embodies this philosophy,” adds Flack. “The graduation rate among our athletes is very high. We’re committed to doing everything we can to help these students succeed both on and off the field, while helping them become employable graduates with the tools to succeed in life.”

Just ask Derkach, the accomplished superstar whose next stop is teacher’s college. “It’s funny – I have the same attitude with my schooling that I have with soccer: I want to be on that leaderboard,” she says. “When I have a goal, I am determined to make it happen. I’ve always wanted to be a teacher. There’s just no other career path for me, so I won’t let anything get in my way.”