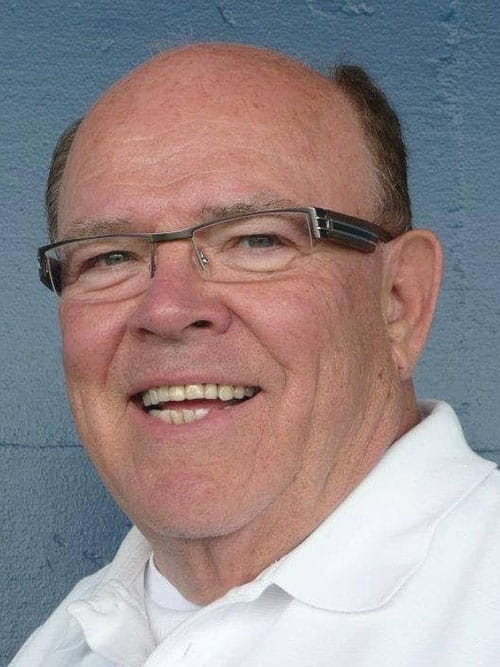 Fred was born in 1939 in Woodstock, NB to parents George and Ann Dunbar and raised in Brantford and Hamilton, ON where, in true Fred fashion, he stirred things up!

Fred was married to the love of his life Helen (Clark) for 46 years and in a house full of laughter and adventure together they raised Leah and Keith. One of his greatest enjoyments was watching his children grow up whether it be at hockey rinks, dance recitals, or family trips to cause trouble in international destinations.

Fred was a football player, athletic therapist, devoted Argo and Guelph Gryphon fan, lover of ice cream, artist (a secret skill!), and the guy you wanted to sit beside at a party. He always had a story to tell, a mischievous twinkle in his eye, and a laugh ready to share.

Wherever Fred worked or lived, the welcome mat was always out; he loved helping others and it was second nature to him. Fred impacted countless people through his years as an athletic therapist at the University of Guelph and the Toronto Argonauts, and as an instructor at Sheridan College. For over 25 years, Fred and Helen extended the love they had for each other into Dunbar Medical where they supported Canadian athletics and healthcare across the country. Friends and family would often turn to Fred for advice on injuries and life. How many times have we all heard the phrase “put ice on it!”

Of his numerous accomplishments, Fred was named Trainer of the Year in 1974, inducted into the University of Guelph's Hall of Fame in 1987 and the Hamilton Hurricanes' Hall of Fame in 1988, and he was a founding member and first president of the Ontario Athletic Therapist Association. While proud of his awards, one of his greatest accomplishments was the many, many friends he made over the years and stayed in touch with. Fred had an unparalleled ability to connect with people.

While we are all just so very sad, we want to say wow, what a wonderful life he had!

Fred’s involvement with the Athletic Therapy program at Sheridan started in 1977. His passion for athletic therapy and his commitment to students shone through his work. Fred supported academic awards, spoke as a guest lecturer, served as a member of the Athletic Therapy Professional Advisory Council and hired students to work at his clinic. He was well-loved by his colleagues and students, and will always be remembered for his gregarious laugh that lit up any crowd. Donations in memory of Fred will support Sheridan College’s Athletic Therapy students to continue his legacy and impact in athletic therapy.