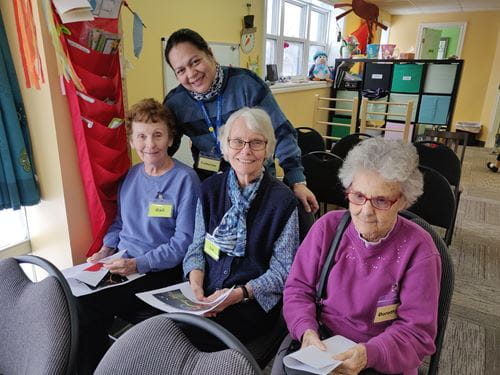 Even though Catherine Caparal (Social Service Worker - Gerontology ’19) spent much of her early career working as a school nurse in Saudi Arabia, she says it’s working with older adults that truly keeps her young at heart.

When Caparal decided to come to Canada in 2017, she chose to study in Sheridan’s Social Service Worker - Gerontology program to complement her health background. Today, she works at the Alzheimer Society Peel, organizing day programs for seniors.

Caparal loves her job. She plans recreational activities such as holiday celebrations or theatre outings for her clients. She says those fun activities keep her feeling energized, and allow her to get to know the seniors while giving them the opportunity to socialize and receive emotional supports – activities that can help them live with the illness. There’s a serious side, too. Caparal’s work allows her to notice health changes. She can pass along her observations to families, and connect them to other community supports they may need.

Caparal is one of many Sheridan alumni who have gone on to work with the Alzheimer Society Peel (ASP). Chris Rawn-Kane, Chief Executive Officer of ASP, says partnering with Sheridan and hiring grads has been a big part of the organization’s recruitment strategy for nearly 20 years.

“Working with Sheridan is a match. It increases our profile among students, who we hope to hire when they graduate,” he says. “It also ensures we have an appropriately trained group of people to work with us.”M

Over the years, ASP and Sheridan’s partnership has grown into much more than just a recruitment opportunity. Today, ASP and Sheridan work together to provide students with high-quality placements on the sector’s front line, ASP helps Sheridan faculty to stay abreast best practices and health policy changes to enrich curriculum development, and ASP celebrates student excellence through financial support.

Social Service Worker - Gerontology Program Coordinator Alexa Roggeveen says working with community partners like long-term care homes and agencies such as ASP is an important part of providing students with the best education. She says those community partnerships keep the academic team up to speed on policy changes and best practices from the field, and they support the students’ education so they’re prepared for the workforce.

“This (partnership) is essential,” she says. “Without talking to those who ultimately hire our students, we don’t know if we’re preparing them adequately.” Roggeveen says ASP’s support of students through financial awards is also an important part of the organization’s work.  Since 2002, ASP has generously supported nine awards for students from across the Faculty of Applied Health and Community Studies, including the Social Service Worker – Gerontology program, who have demonstrated significant academic achievement. These awards give faculty the chance to celebrate students and show them that their hard work is valued by the industry where they’ll begin their careers. The awards are handed out each year at the academic awards ceremony – an annual event that celebrates the Faculty’s top performers. Rawn-Kane says such a long-term investment in the program is an important commitment for ASP, which is a non-profit agency.

Rawn-Kane says offering the awards is a way to honour the founding members of the ASP – many of whom have awards named for them. But they’re also a way to develop relationships with the next generation of gerontology professionals, who can be tapped to care for an increasing number of clients.

Looking to the future

In the next 15 years, the Alzheimer Society of Canada predicts the number of Canadians living with dementia will jump to 937,000, and care providers like Caparal will be an important part of their lives. But the challenge is recruiting them. Roggeveen says many people don’t often see the rewards of working with older adults until they are faced with caring for their own family member. “That’s one of the things that makes our students and graduates so special,” she says. “They are passionate about making a difference in the lives of older adults.”   Thanks to ASP’s generosity, Sheridan will continue to provide students who do chose gerontology with the exceptional training they’ll need to care for our communities’ seniors.