In honour of Hazel McCallion’s 100th birthday, Sheridan today unveiled a mural at her campus namesake, paying tribute to the extraordinary achievements of its first-ever Chancellor.

Commissioned by Sheridan, the mural was created by one of its recent Honours Bachelor of Illustration graduates, Jude Phillips. Titled “100 Years Strong”, the mural vividly captures some key moments in McCallion’s illustrious life. As Phillips’ artist statement explains: “In a time when putting the needs of others before our own is more important then ever, let us celebrate Hazel McCallion who, for 100 years, has done just that.  She has dedicated her life to serving and uplifting the members of her community through leadership, generosity and integrity.” “Ms. McCallion is a great inspiration, and her life is a testament to the joyful truth that we are capable of enduring tough times not only with grace, but also with humility and a touch of humour,” says Phillips. “Through the use of colour and whimsical design, my piece is designed to reflect our continued appreciation of “Hurricane Hazel” and her compassion, dedication to community and legacy of selfless public service.”

McCallion became Sheridan’s first-ever Chancellor in 2016, and continues in the role, having overseen more than 50 convocation ceremonies.

“When Sheridan sought to appoint its first ever Chancellor, we were seeking someone whose leadership and personal qualities would inspire and motivate our students to pursue their dreams with energy and commitment,” said Dr. Janet Morrison, President and Vice Chancellor. “We could not have found a better candidate than Hazel McCallion. Her leadership qualities are unquestionable, and she lives the values we strive to instill in our students, including determination, putting the needs of others first, independence and integrity, teamwork and living a life of purpose.”

The mural is installed in the windows of the Hazel McCallion Campus’s A-Wing, facing east onto Duke of York Boulevard, where it will delight and inspire passersby for the next two months. 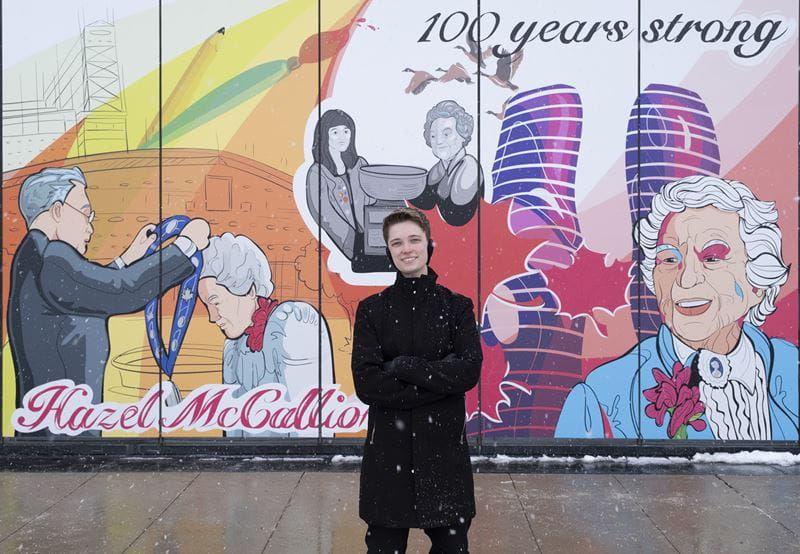 Pictured above: Sheridan Honours Bachelor of Illustration graduate Jude Phillips standing in front of the mural he designed as a tribute to Chancellor Hazel McCallion.