While the weather outside may be chilly, things are heating up in the Blown Away hot shop.

The highly-anticipated second season of the hit Netflix reality series is set to debut on January 22.

In the new season, viewers will see 10 exceptional glassblowers push themselves to creative extremes, with the help of students and alumni from Sheridan’s Bachelor of Craft and Design (Glass) program serving as featured assistants.

Hosted by YouTube star Nick Uhas, Blown Away’s skilled glassmakers are given a challenge and limited time to fabricate beautiful works of art that are assessed by a panel of expert judges. One artist is eliminated in each episode, with the winner earning the title of Best in Blow. 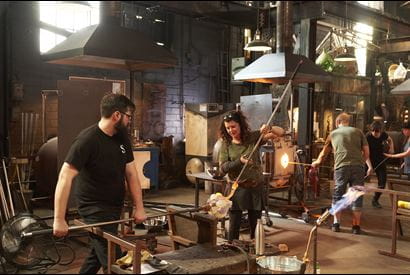 The first season of Blown Away garnered rave reviews across Canada and in The New Yorker, Time Magazine and The Washington Post. It was praised for showcasing a deep appreciation for the art of glassblowing and a respect for the extraordinary artists who have mastered the medium. This season, Blown Away continues its exploration into the world of glassblowing, featuring contestants from across the globe.

“Blown Away was made possible thanks to input from Sheridan’s alumni, students and technologists, which helped build not only the physical studio, but also the infrastructure of the series,” says Koen Vanderstukken, Sheridan’s Head of Glass and series consultant. “Returning for the second season, all the assistants from Sheridan knew how to prepare, what to expect, and were able to seamlessly bring their talent, skill and passion to the production.”

Sheridan helped bring the first season of Blown Away to the small screen in February 2019. Vanderstukken served as the series consultant, and Sheridan loaned over $10,000 worth of equipment to outfit the show’s Hamilton-based facility (what is now North America’s largest hot shop). In addition, students and alumni from Sheridan’s Bachelor of Craft and Design (Glass) helped build the hot shop and were featured heavily in the first season.

This season, Sheridan grads continue to be a key focus, with 10 alum serving as featured assistants.

Dr. Janet Morrison, Sheridan’s President and Vice Chancellor had the chance to view the competition up close when she appeared as a guest evaluator in the first season. This time around, Sheridan alumna Kathryn Durst (Animation ’12) serves as a guest evaluator on episode three of the series. Durst, a celebrated children’s author and illustrator, made headlines in 2019 when she illustrated Hey Grandude! – a children’s book written by Paul McCartney.

“I am consistently impressed by the creativity and skill of the students in Sheridan’s Glass program and am thrilled that they’ve been able to share their talents and support some of the world’s top glass artists on Blown Away,” says Morrison. “During these unprecedented times, I am mindful of the importance of celebrating local artisans, and through Blown Away, I’m pleased that Sheridan can play a part in drawing attention to such an inspiring artform.”


The second season of Blown Away launches on Netflix on January 22.

Watch this video to go behind-the-scenes with Sheridan College on set of the second season.

Click here to learn more about Sheridan grads were involved in Blown Away.

Pictured above: Sheridan Glass alumni working as assistants on set of Netflix's second season of Blown Away. Images by David Leyes. Courtesy of MarbleMedia.