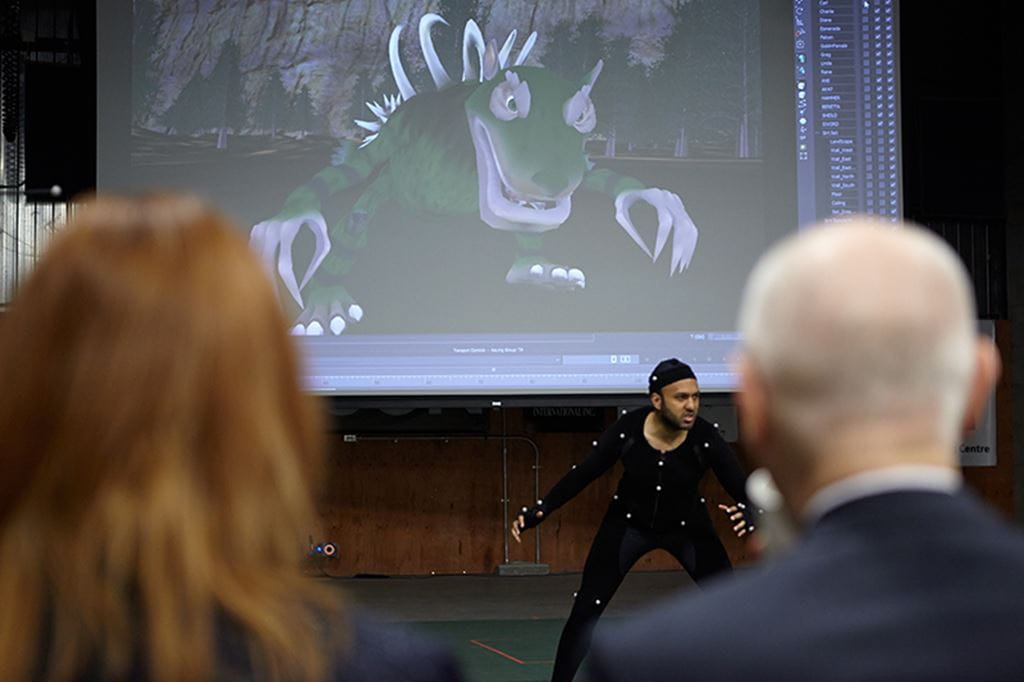 This week, the Sheridan community is among many in the Greater Toronto Area eagerly anticipating the results of the Intelligent Community of the Year competition.  The name of the winning city will be announced this week in New York City.

The competition is sponsored by the Intelligent Community Forum (ICF), a  New York-based organization that focuses on building the broadband economy and ensuring that people have access to technology that can help improve their lives.  Although Toronto is already an ICF Top 7 city finalist, Sheridan played a key role in supporting the city’s bid to claim  the number one title.

Waterfront Toronto, the organization leading Toronto’s bid in the competition, asked Sheridan’s Screen Industries Research and Training (SIRT) Centre to share its expertise in film technology as a prime example of the city’s strength in the film and technology sectors.  During the ICF’s official city visit in April, co-founder Louis Zacharilla joined about 50 people at SIRT’s Pinewood Studios location in Toronto, and was treated to a motion capture demonstration that gave a behind-the-scenes look at how technology  impacts what people see on film.

“Toronto is doing an incredible job of realizing the core principles of an ‘Intelligent Community’ by using broadband connectivity in particular, and technological infrastructure in general to help its citizens have a better quality of life at work, at home, and at play,” said John Helliker, Sheridan’s Director of Strategic Partnerships and SIRT/SirtNet.  “Being a finalist, and hopefully the winner of Intelligent Community of the year, will help raise awareness of these core strengths, both at home and abroad.”

Helliker and Ralph Benmergui, Sheridan’s Executive Advisor to the President were invited to go to New York as part of Waterfront Toronto’s delegation to take part in the conference that includes the announcement of the winner.   Officials at the City of Toronto will also be looking forward to the results.

“Toronto being in the Top 7 for the Intelligent Community of the Year sends a strong message about the value and opportunities for the people that live, work and play in the City,” said Grant Coffey, Manager, Strategic Planning, Policy & Standards with the City of Toronto’s Information & Technology division.  “I thought SIRT’s presentation demonstrated a creative energy that's fostering the next generation's workforce, as well as interesting and collaborative approaches that support common goals in the technology industry.  SIRT's work is important as it ultimately contributes to a learning culture that helps the economic vitality of the City.”

Kingston joins Toronto as the other Ontario finalist for the top Intelligent Community of the Year, while Winnipeg completes the Canadian entries.  Arlington County, Virginia and Columbus, Ohio are the two American cities vying for the recognition.  And Taiwan’s Hsinchu City and New Taipei make up the Asian finalists.