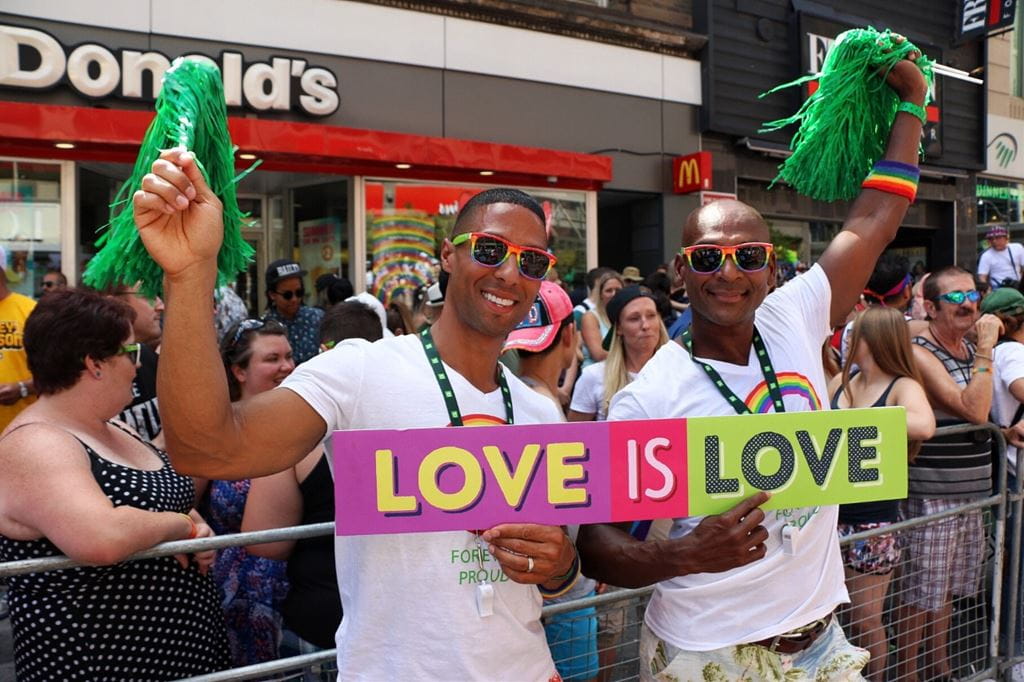 Al Ramsay is walking on rainbows. The Pride Silver Rounds recently minted by TD Bank – special silver coins carrying a rainbow circle and the inscription Forever Proud – are flying off the shelves. The money will be donated to Rainbow Railroad, an organization that helps lesbian, gay, bisexual, transgender, and queer individuals escape violence and persecution in their home countries around the world.

It seems everyone wants a rainbow in their pocket, and as TD’s Associate Vice President responsible for diversity and inclusion and head of LGBTQ2+ and Black Customer Segments, Ramsay could not be happier. The coin’s success is one more step forward on the difficult road to gaining acceptance for the LGBTQ2+ community.

That is the road Ramsay, a Pilon School of Business graduate (Business Administration, Marketing ’97), travelled to be where he is today – giving back to the LGBTQ2+ community from a position of power at a leading bank. He has walked in the shoes of those he helps, and like them, suffered in silence and felt ashamed for being different. For years he hid his sexual identity from his family, friends and the world for fear of censure and, possibly, reprisals.

“I did not tell anyone that I was gay. I was a chameleon, living two lives,” says Ramsay, looking back on his early years in Jamaica where he was born. Homophobia was then deeply rooted in Jamaica and not only were gays despised, they could also be subjected to extreme violence. What made things worse for Ramsay was, just as he began to explore his sexual identity as a teenager, his parents moved to Canada to find their feet in the country before uprooting their children and bringing them to their new home .

“Sheridan was my backyard, a part of the community, and the friends I made there are still my friends. They took me into the fold.”

Ramsay and his siblings were left to the care of a large and loving extended family that was also extremely religious. His grandmother was a pastor and he was an altar boy and to this day, can recite the Bible with ease.

“I was 13 years old when my parents left and I didn’t see them for the next five years. Even though I was loved and cared for, and my family did everything possible to keep me happy, there was homophobia all around. Gays who came out were treated as outcasts, vilified, and could even be killed,” Ramsay says. “I was deep, deep in the closet for fear of being found out.”

Ramsay had to survive being gay and for that, he hid his sexual identity behind a façade of masculinity. He was a brilliant student and worked hard in school to get the grades he needed to continue his education once he reached his dream country – Canada. He was 18 when his parents became permanent residents and brought him and his siblings to Canada. His new home was in Brampton on Steeles Avenue, around the corner from Sheridan’s Davis Campus.

The happy geographical coincidence decided the next few years of Ramsay’s life and laid the foundation for his education in Canada. One of his aunts took him to Sheridan and got him to enrol. Ramsay says joining Sheridan was the best decision he had ever made. In addition to being a great way to integrate into Canadian society, Sheridan was more of a home to him. “Had I gone to a university, I would have been lost. Sheridan was my backyard, a part of the community, and the friends I made there are still my friends. They took me into the fold,” he says.

Though a top student, Ramsay didn’t have any exposure to computers in Jamaica and was almost afraid of entering the computer lab at College. He also wouldn’t talk much in class, afraid that he would be ridiculed for his thick Jamaican accent. However, his professors and his friends at Sheridan gave him confidence. He still remembers how one of the professors gave him extra time and sat with him till he finished his exam as he slowly keyed in his answers.

“Another professor wrote on my answer sheet, ‘100 per cent plus plus plus’ and said if she had more to give, she would have,” he recalls fondly. The unstinting support helped Ramsay come into his own and start to live a life without fear. After completing his program at Sheridan, Ramsay transferred to get his BCom degree at Ryerson.

However, he still wouldn’t disclose to anyone that he was gay. “It wouldn’t have mattered if they had painted every wall at Sheridan in rainbow colours, I had to make my own personal journey to come out. It is a lot of shame we carry inside us because society has told us again and again that we are not worthy of love. Most of us spend a chunk of our lives breaking that façade we create around us, in accepting who we really are,” he said.

After graduating from Ryerson, Ramsay got an internship on Bay Street in downtown Toronto and continued to lead a dual life – split between his home at Brampton where he was closeted, and Toronto where he was free to live his true self with friends. But then, a senior colleague began to bully him after hearing him on phone with his gay friends. “This was 17 years ago and it speaks to the work culture then, where an intern could be openly bullied in the workplace for being gay. I was very afraid and worried,” Ramsay said.

At about the same time, his work brought him in contact with a few LGBTQ2+ community leaders. Continually harassed at work, he broke down and discussed his problems with one of them. “It took so much courage to confide in him. I had never come out to anyone like that before. I call this person my fairy godfather and he introduced me to TD’s head of community relations,” Ramsay says. TD was then looking for someone to authentically build its brand in diverse communities. At the end of what he thought was a casual meeting with the TD executive, Ramsay had a new job that respected him for who he was.

“I had to make my own personal journey to come out. It is a lot of shame we carry inside us because society has told us again and again that we are not worthy of love.”

“I decided then and there to rebrand myself, even change my name,” says Ramsay. He took the initial letters of his first and middle names and created a new name for himself – Al.

“I said to myself I’d never hide again. I would walk into TD Bank as a proud gay man, and the rest is history,” he says. He came out at TD, much before he acknowledged being gay to his own family.

Ramsay was among the first of TD’s employees to focus on equity and diversity. In 2005, in an initiative he spearheaded, TD became the first of the Big Five banks in Canada to sponsor a Pride festival. “We sponsored the Toronto Pride Festival, and an unprecedented backlash followed. We were called the ‘devil bank’ by protesters; customers withdrew millions of dollars, but we stood firm. TD’s CEO said our principles are not up for negotiations and that empowered me,” Ramsay said. He also made internal, systemic changes at TD by organizing an employee resource group for members of diverse communities, including visible minorities and LGBTQ2+.

Ramsay was later promoted to HR, Diversity and then became Senior Manager, Marketing. It was a position where he could utilize his learning and experience from the Marketing program at Sheridan. His job was to redesign TD’s marketing strategy to ensure that its ads had diverse images of its customers.

“One of my proudest moment was to launch an ad campaign that included LGBTQ2+, Asian, South Asian and Black communities depicted in a way that wasn’t stereotypical,” he says. He also put in place a unique customer program for the LGBTQ2+ community and is often approached by banks around the world, wanting to learn from TD’s success in the LGBTQ2+ segment.

In 2020, Ramsay’s mandate was expanded so he could share the best practices from his LGBTQ2+ work to support the Black community. “Our CEO, Bharat Masrani, is firmly of the view that economic progress is key to reversing the impacts of systemic racism and bias,” he says. “Our goal is to achieve wealth parity and financial inclusion.”

Ramsay says the most rewarding part of his work now is knowing he’s helping to create a world where everyone can be themselves. The 13-year-old who once hid from the world – afraid to tell his truth and floundering without help – has empowered himself to bring in change. He is living Forever Proud.