The Chancellor serves as the ceremonial head of Sheridan, presiding over convocation ceremonies and serving as an ambassador for the institution. The Chancellor is appointed by the Board of Governors. 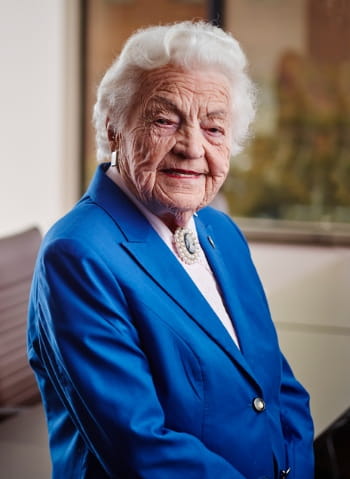 Ms. McCallion began her career in Montreal with Canadian Kellogg, an engineering and contracting firm, and was transferred to Toronto in 1942 to help set up the local office. She worked with the company for 19 years before leaving in 1967 to devote her career to politics.

In 1968, she was elected as Deputy Reeve of Streetsville. McCallion was appointed Reeve, and then elected as Mayor of Streetsville in 1970, serving until December 1973. When the Region of Peel was established in 1974, she was elected to the Mississauga and Peel Regional Councils. She served two terms as a Councillor prior to her mayoral campaign in 1978. By the time she was elected Mayor, she had sat on virtually every committee at the Region of Peel and the City of Mississauga. She has also served on the executive of many federal and provincial committees and associations.

McCallion has played a leading role for women in politics. She is the first woman to hold such significant positions as President of the Streetsville and District Chamber of Commerce; Mayor of Streetsville and Mayor of Mississauga. She was chosen one of the "American Women of the Year" in Who's Who of American Women (which refers to North American women). In 2005, she was appointed a Member of the Order of Canada. Ms. McCallion has received countless other honours over the course of her career, including the BrandLaureate Hall of Fame Lifetime Achievement Award in 2014, which recognizes and honours outstanding individuals who have contributed significantly to the world through their field of expertise. Sheridan presented her with an Honorary Degree of Applied Studies in 2015. The Chancellor was formally installed on June 6, 2016, prior to the commencement of convocation ceremonies.

MPP Amrit Mangat makes a statement to the Ontario Legislature on March 10, 2016 about Hazel McCallion’s appointment as Sheridan’s inaugural Chancellor.